www.natureconservancy.ca > Home > Where We Work > Newfoundland and Labrador > Stories From the Field

Eyes in the Skies 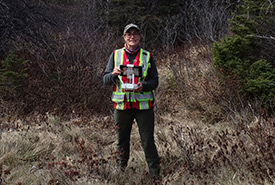 Megan Lafferty, the Nature Conservancy of Canada’s Newfoundland and Labrador program director, is using a drone as a conservation tool — a first for NCC in Atlantic Canada.

Megan spent several months becoming a certified drone pilot, enabling her to take photos and videos of NCC properties that are too large or difficult to access by foot.

With the help of the drone, Megan is collecting detailed ecological information about our nature reserves and, in sensitive areas like river estuaries and bogs, avoiding ground surveys that might cause erosion or damage.  The drone images can also help identify potential threats like illegal dumpsites that might otherwise go undetected.

So far, Megan has completed drone surveys in the Codroy Valley and at Crabbes River in southwest Newfoundland, and a survey is planned for Freshwater Bay on the Avalon Peninsula.  With 11 nature reserves spread across the island of Newfoundland, NCC has a huge amount of ground to cover. By becoming NCC’s first certified drone pilot in the Atlantic region, Megan is now able to get a wider perspective on entire landscapes and prioritize future conservation projects.