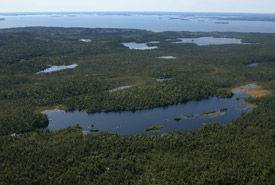 Deep Cove is a remarkable tapestry of mature forest, bogs, fens, shrub barrens and small lakes. The Nature Conservancy of Canada's (NCC's) conservation areas here feature possibly the largest stand of jack pine in the province, a thriving forested bog and rare lichens. Together they form a vast ecological corridor that functions to maintain the health of local ecosystems and foster regional biodiversity.

Deep Cove at a glance

Through continued stewardship, we hope to maintain the incredible biodiversity found within the property's borders.

Escalating land prices, damage from motorized vehicles, and timber harvesting are concerns surrounding NCC's Deep Cove properties. Scientific assessments have indicated it is a sensitive area where conservation is key.

Our efforts have secured a wide corridor of habitat, thus protecting Deep Cove from the factors that may compromise other properties in the area.

Prior to NCC's acquisition of these properties, forest harvesting impacted nearly eight per-cent of the total area. Through careful management, we hope to strengthen the diversity and health of the region so it will be sustained for decades.