The Nature Conservancy of Canada (NCC) and partners have successfully completed a special project aimed at protecting migratory shorebirds and their globally significant habitats in the Bay of Fundy. Throughout 2018 and 2019, NCC worked with Bay of Fundy communities and conservation groups to raise awareness of new research and the implications for semipalmated sandpipers and other migratory birds.

NCC built support for an application to the Western Hemispheric Shorebird Reserve Network (WHSRN) — an international conservation organization. The application was successful, and expanded WHSRN’s recognized sites to include newly discovered habitats in Cumberland Basin and Cobequid Bay. NCC and our partners' efforts won a designation of Landscape of Hemispheric Importance for these two new sites (outlined in purple), along with two others that had been previously recognized as key habitats. 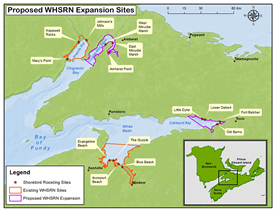 Every summer, close to one third of the world’s population of semipalmated sandpipers arrives in the Bay of Fundy to rest and feed before their migration to South America. New research conducted by Mount Allison University and the Canadian Wildlife Service shows that beaches and mudflats in Cumberland Basin (near Minudie) and Cobequid Bay (near Debert) are critical for semipalmated sandpipers. The species has declined by more than half since the 1970s.

The Bay of Fundy is the only area in Canada recognized by WSHRN. The designation of Landscape of Hemispheric Importance does not impose regulations but it will help migratory shorebirds and enable better coordination of science and conservation efforts. Only three other sites in the world have been recognized as Landscapes of Hemispheric Importance.