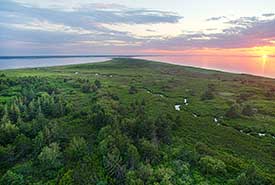 Made in Atlantic Canada

For 50 years, people in Atlantic Canada have been helping the Nature Conservancy of Canada (NCC) protect critical habitat in their communities. It all began in 1971 when Sight Point, NCC’s first nature reserve in Atlantic Canada, was established within the coastal wilds of Cape Breton Island’s Mabou Highlands. Today, it continues to thrive and flourish in its wild state.

The East Coast is a special place to live, work and explore, with wild spaces, rare animals and plants found nowhere else in the world. Thanks to local community members and NCC Atlantic Region’s founding members Linda Stephenson (vice-president) and Bill Jones (regional board member), the first Atlantic office was opened in Fredericton, New Brunswick, in 1998.

Thanks to NCC supporters, wilds places in New Brunswick, Newfoundland and Labrador, Nova Scotia and Prince Edward Island will remain protected, for everyone. 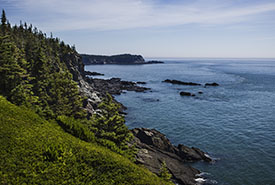 In Nova Scotia, escape bustling city life at the Shaw Wilderness Park. Walk in the shadows of towering white and red pine trees where 40 species of birds live and nest. Listen to the peaceful call of loons carry clearly across Colpitt and Williams lakes. Come swim in the glistening lakes and hike the shoreline trails.

Another favourite destination in the region is the Johnson’s Mills Shorebird Reserve and Interpretive Centre in New Brunswick. Thousands of visitors flock here each year to marvel at the shorebirds that feast and rest at the protected area before continuing their migration to South America.

Nature can feed your soul and improve your quality of life. When you support conservation in your community, you make it a better and healthier place for you, your family and your community.

What we’ve achieved together:

This year, NCC celebrates its 50th anniversary in Atlantic Canada with the announcement of the East Coast Nature Fund. Your gifts through this fund can help lay the foundation for conservation in Atlantic Canada for the next 50 years. With your support, we will identify sensitive areas where endangered species and rare plants are at risk. Your contribution is crucial to land conservation, trail and site maintenance, mentoring youth through internships, and so much more.