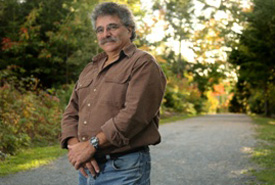 At a Celebration of Life in Halifax in April 2016, there were many stories told, through laughter and tears, about professor Bill Freedman (known to many as Dr. Bill): a respected scientist, an optimistic ecologist and a passionate teacher who served as both Atlantic and National Board Chairs for the Nature Conservancy of Canada (NCC). Dr. Bill died of cancer in September 2015. This was a tremendous loss for his wife George-Anne, two grown children, Jonathan and Rachael, newborn granddaughter, Luthien, and their extended family.

Dr. Bill, grew up in downtown Toronto, where he spent many happy hours roaming the city's rivers and ravines. At the Celebration of Life, a childhood friend recalled catching his first salamander with Bill. He also vividly remembered seeing Bill walk a raccoon along Bloor Street on a leash, one of many examples of Bill's mischievous sense of humour.

Those youthful adventures on Toronto's wild side led to a lifelong love of nature that Dr. Bill later expressed in many ways. He was a professor of biology and environmental science; he was author of more than 100 refereed scientific papers and 10 books, including the first Canadian environmental science textbook; and he was honoured by the Canadian Geographical Society with a Gold Medal Community Award for Conservation. Dr. Bill helped guide NCC's conservation vision and efforts for 25 years and even wrote a book about NCC, A History of the Nature Conservancy of Canada.

"Bill Freedman was a force for nature," said NCC President and CEO John Lounds, at Dr. Bill’s Celebration of Life. "One hundred thousand acres have been conserved across Canada because of Bill."

In addition to his tremendous contributions to NCC, Bill Freedman influenced thousands of students over the years he taught biology and environmental science at Dalhousie University. One of his Dalhousie colleagues, Dr David Patriquin, remembered him as having "…the hair of Albert Einstein, the mustache of Groucho Marx, and some of the best qualities of both." Patriquin also said Dr. Bill was "…the Best Chair of Biology Dalhousie University ever had and he promoted Nature Conservancy of Canada, ceaselessly, but gently, to his colleagues."

To honour Bill Freedman's outstanding contributions to NCC and to extend his impact to future conservationists, NCC has established the Dr. Bill Freedman Science in Conservation Internship. The internship will support one student each year to work alongside NCC's senior conservation staff to address important knowledge gaps.

The first Freedman intern is Lee Pominville, a recent graduate of Dalhousie University's Masters of Resource and Environmental Management Program. Working out of NCC's Halifax office, Lee is doing an analysis of invasive species and Species at Risk in Atlantic Canada to guide NCC's conservation plans in the region.

"This is a huge opportunity," says Lee. "Because of the internship, I am able to gain real-world experience in conservation and build a foundation for a career I am extremely passionate about."

The Freedman Science in Conservation Internship was established with an anonymous donation of $50,000. NCC continues to seek funds to ensure the Dr. Freedman Internship will be supported in perpetuity. We have more to raise — please give today to continue the legacy of Bill Freedman.