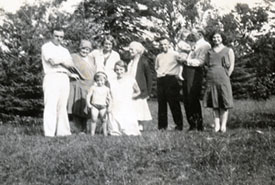 Land that was once purchased to help sustain a family and their small carriage making shop has evolved to become so much more. Imagine a landscape where cows once grazed and where your family could enjoy picnicking, playing and running in the grass. Where the trees held special memories of your family relaxing under their canopy and of those festive times when you would bring home the perfect Christmas tree for the holiday season. The McClure’s Brook property is just such a place, and it was known to the Layton family as the “pasture.”

Siblings Elma Lank*, Charlotte MacQuarrie and Norman Layton share their memories of the property and how it would come to be cared for by future generations.

“In 1853, our great-grandfather Francis Layton purchased seven hectares at McClure’s Brook. This pastureland was about a mile from his Truro home, carriage shop, and small subsistence farm located on Willow Street,” says Norman. Francis’ children and other family members worked on and enjoyed this property for many years. Soon after the First World War, the pasture became their father’s responsibility to care for as none of his siblings would remain in the area.

“I still remember our father telling us how he would ride a mile, on horseback, to the pasture to bring the cow back for milking," Charlotte recalls of the early days, "It was around the late 1930s, during the hard times of the Depression when unemployed men, down on their luck, rode the rails on freight trains that passed by the property."

The pasture was a gathering place for the family to enjoy happy family get togethers. Norman and his siblings have many memories of picnics when they travelled to McClure’s Brook in a car that needed to be cranked to start. “I remember those picnics like the back of my hand,” says Elma. The Laytons would gather under a huge pine tree to enjoy a meal together and sit on spread-out blankets. “There were no folding chairs or coolers in those days,” jokes Elma. “Sometime after lunch we would head to the brook with hopes there was enough water to wade in. Other times, we would head down with our father to the flat land called the cricket field to play baseball.” 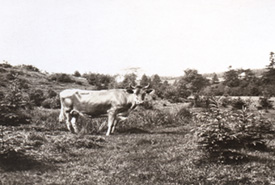 There were many non-picnic outings in this area too, just to enjoy the sights of nature. Norman adds “It was on these excursions that our father, using a jackknife, would fabricate wooden whistles out of an alder branch. Of course, during the Christmas season, the family would often walk there to get a Christmas tree and lug it home on a sled. I have not forgotten how cold those walks were in that strong wind.”

The frequent family picnics trailed off when access to the property started to be affected by overgrown bushes and branches. While gatherings at the property became less frequent, the pasture remained part of the family’s life, and often, over the ensuing years, part of many recollections.

In 2000, the land was passed on to Elma, Charlotte and Norman to care for. Although walks are less frequent and there are no longer family picnics, the memory of this beautiful landscape remains. Over time the pasture has returned to its natural state and wildlife such as red-breasted nuthatch, red-eyed vireo, veery, and blue jay thrive here.

Concerned for the long-term care of the land, which holds so many memories, the Laytons approached the Nature Conservancy of Canada (NCC). The family did not want to see the land developed but wished to have it left natural for others to make their own memories. Together, the Layton family donated all seven hectares to NCC knowing that the land would be cared for in perpetuity. After so many years since 1853, the Laytons are still closely connected with the property, as Francis Layton’s two great great grandsons, Rod MacQuarrie and Michael Layton, are serving as the current stewards of the property.

“We feel that the pasture is in good hands, and we trust that the Nature Conservancy of Canada will care for this special place as we have for the past 169 years,” Norman says. “We encourage other families to consider donating land for conservation, so that wildlife and folks can explore and make memories.” To learn about how you can donate land, click here.