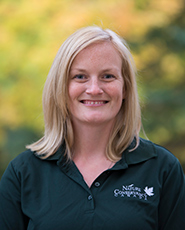 Kristyn Ferguson is acting director of conservation and program director for Central Ontario – West at the Nature Conservancy of Canada, where she has worked in a variety of roles since 2007. Kristyn obtained her B.Sc. in environmental biology from the University of Guelph and an MES in restoration ecology from the University of Waterloo. At work, Kristyn is passionate about invasive species control, conservation real estate and getting people into nature. In her free time, she enjoys cycling, cross-country skiing and stand-up paddleboarding, writing poetry and adventure travel. She lives in Guelph with her husband, Jeff, their rescue dog, Bailey, and her beloved electric car, "Sparky.”