Charleston Lake, ON (Photo by NCC) 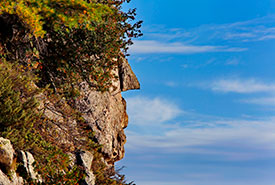 A family legacy on the shores of Charleston Lake

“Michael is a problem solver. He does not give up.”

That is how Gary Bell, the Nature Conservancy of Canada’s (NCC’s) program director for eastern Ontario, describes Michael McAdoo, donor and partner on the acquisition of NCC’s Old Baldy property, near Kingston, Ontario.

It would be this tenacity and drive that would carry Michael down a six-year journey that would not always be easy.

Originally from Kingston, Michael purchased a cottage on Charleston Lake in 2008 — a lifelong dream of his. In early 2009, he learned of a plan to subdivide the property next to his into cottages. These cottages would sit atop the Old Baldy cliffs — key habitat for many species in the area.

“Behind Old Baldy are 130 acres of amazing wetlands and forests and all kinds of habitat for all kinds of species,” said Michael. “My wife, daughter and I were worried about the impact of having people and roads up there.”

Having heard of NCC through an earlier project on Charleston Lake, Michael reached out to see what might be done. “Michael didn’t want to see this important natural area developed, so he led the charge to protect the area. We entered into what would become a six-year partnership,” said Gary.

“I wanted to work with an entity that had perennity,” said Michael. “I wanted to deal with an organization that I knew would outlive its current managers and leaders and stay true to its mission in perpetuity.”

Old Baldy is one of NCC’s more recent additions to the Frontenac Arch Natural Area, the southernmost extension of the Canadian Shield, which extends from the Algonquin Highlands of Ontario to the Adirondack Mountains of New York. This is also one of the most biologically diverse areas in Ontario. It is particularly rich in reptile, plant and bird species. It is also a major north-south migratory corridor.

With white granite cliffs and deep, turquoise-blue waters, Charleston Lake is a stunningly beautiful home to a variety of wildlife, a popular fishing spot and a favourite with cottagers since the late 1800s.

One of the few natural areas not protected by Charleston Lake Provincial Park, Old Baldy is important for its wetlands, high-quality forest and habitat connection. Its rugged terrain is characteristic of the Frontenac Arch, with high domed granite ridges, deep wooded valleys and wetlands, including beaver ponds, marshes and wooded swamp. The forests are dominated by sugar maple, white ash, red oak and white oak. 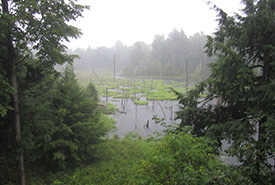 Wetland behind Old Baldy, ON (Photo by Michael McAdoo)

NCC needed time to rally support and funds. The McAdoos and the longtime owners, the Heffernans, worked together to find a conservation outcome for the property. Michael stepped in as interim owner and agreed to manage the process that would see the lands transferred to NCC, as well as donating a small portion.

But this was no easy process. There were significant challenges and transitional costs that Michael faced as he worked toward the protection of Old Baldy. So, along with NCC, Michael partnered with the Thousand Islands Watershed Land Trust, which helped raise money to cover many of the costs associated with the securement of the property.

“We were thrilled to get a significant amount of local fundraising done by the land trust to complement the Ontario level and national level fundraising that NCC had done,” he said.

At the end of last year, NCC and the McAdoo family finally completed the Old Baldy project, leaving NCC with an additional 53 hectares (132 acres) of protected land on the Frontenac Arch and a staunch supporter in Michael.

“Whether it was Gary Bell, the program director who was my true partner for more than half a decade on this project, NCC’s legal team in Toronto or NCC’s eastern Ontario field team led by Ali Giroux, the Nature Conservancy of Canada is truly professional and a joy to work with,” said Michael. “I feel like they’re almost part of the family.”

The McAdoos, and other residents on the lake, have been very supportive of NCC’s work — helping out the field team by reporting wildlife sightings and assisting with important stewardship work.

Last summer, after a half-century absence, peregrine falcons returned to Charleston Lake. Although there are many suitable cliff sites around the lake, the peregrines chose Old Baldy as their nest site.

“One morning I woke up to the sound of a very unusual bird that I hadn’t heard in the area before, but that I recognized from some nature programs that our ten-year-old daughter was watching,” said Michael. “I said to my wife, ‘I think that’s a peregrine falcon.’ Sure enough, it was. It was like Mother Nature herself was saying ‘thank you’ to all of us who worked so hard for this.” 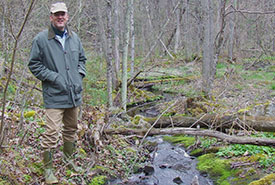 Michael McAdoo, ON (Photo by NCC)

And it is all thanks to the power of partnership that Old Baldy can remain a home for species like the peregrine falcon forever. Michael and his wife, Theodora Samiotis, are already passing their vision to the next generation.

“Our 11-year-old is a big advocate for conservation,” said Michael. “This project has been in my daughter’s life since she was five years old. She likes to take her friends up to the property and show them around. And she always says that because of what our family did, and will keep on doing, that this property will be protected forever.”

Earlier this week, in recognition of World Environment Day, the Nature Conservancy of Canada (NCC) announced further conservation success in the Frontenac Arch. NCC has acquired six properties, including Old Baldy, together totalling 315 hectares (780 acres), which will remain undeveloped for the benefit of nature.