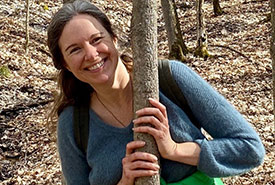 Recognize and give back. Every profit is paid for by nature in one way or another. Once we recognize this, a balance must be struck to replenish and give back to nature. This ancient Toltec philosophy has inspired business owner, nature lover and tattooist, Allison Tait.

Allison’s deep-seated love of nature goes back as far as she can remember. “As a child, I loved nature so much, it was almost overwhelming,” she says. She was always drawn to nature, especially areas that were untouched or appeared undisturbed by humans. She spent hours in her favourite spot up the Niagara River, where other people weren’t seen or heard, just sitting there, enjoying the sights and sounds. 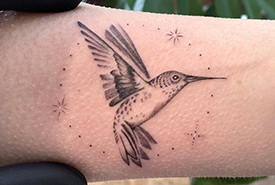 Allison’s deep connection to nature grew with her and led her to work in wild bird rehabilitation at a young age while also exploring art based in nature. She later worked in raptor medicine at a wild bird clinic and as a veterinarian. Allison continued to explore art in nature, and opened Toltec Spirit Tattoo in Guelph, Ontario, where she now works and where nature is still a focal point of her artwork.

Toltec Spirit Tattoo encompasses and showcases Allison’s philosophies – she donates profits to organizations that care for and protect nature and has been a supporter of the Nature Conservancy of Canada for several years. “Toltec’s approach of sharing profits with Mother Nature is an example of modelling an ancient and much needed practice of recognizing that we are taking from Mother Nature and that we need to voluntarily give back to the Earth regularly,” she says.

But to Allison, it’s more than just a donation once a year, it’s, “every time we eat or buy something new, we take something from nature, and we need to rebalance that and help the planet recover. We just need to recognize that we need to give back. Donating to charities is vital, but we need to also make conscious decisions that help the environment.” 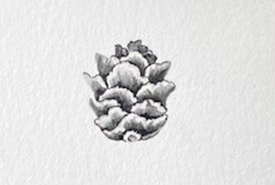 Allison has been designing two special tattoos that represents just that: making a commitment to take daily action to protect the Earth. One is a small hemlock cone and the other a maple key; they represent planting seeds of nurturing for the planet. “A forest is always cool on a hot summer day and is calm during a storm,” says Allison. The tattoos will be a small daily reminder to those who bear it, of their commitment to care for  nature the way nature cares for us, remarks Allison.

Allison’s connection to nature has only deepened. “Nature is like oxygen for me,” she says. She spends her free time outdoors — hiking, creating her own pollinator garden, or just sitting and connecting with the nature around her. She still loves raptors, owls being her favourite, and hopes to eventually return to work in raptor rehabilitation.

Thank you, Allison, for your continued commitment and support!