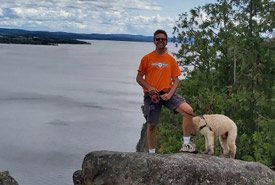 During his MBA studies at Toronto’s Schulich School of Business, Garry Innanen had a homework assignment that became the catalyst for his entire outlook on life.

The course was self assessment and career development, and the students were challenged to reflect on their experiences and goals as part of a written interview.

“I came to realize that some things were important in life, but that I hadn’t spent enough time thinking about them,” Garry says. At the top of his list? Nature. “I had a dream of hanging out in the woods like the ones I grew up with,” he laughs.

But it took another 20 years before the time was right for the Scarborough, Ontario, entrepreneur, husband and busy father of two to act on his dreams.

In 2010, Garry was in the process of selling one business and launching a sustainability enterprise when he met a senior staff member from the Nature Conservancy of Canada (NCC). He was immediately transported back to his MBA class and rural upbringing. This time, when the opportunity came to immerse himself in nature, Garry said “yes” and joined NCC’s Ontario board.

He spent the next six years on the board helping with conservation projects like NCC’s Southern Norfolk Sand Plain, a rich mosaic of forests, wetlands and agricultural lands situated in the Carolinian Life Zone. The Carolinian Zone supports nearly 25 per cent of Canada’s species at risk, including American badger, eastern flowering dogwood and prothonotary warbler. A geologist by training, Garry also co-led donor tours of the Brickworks and Scarborough Bluffs near his home to help connect more people to nature.

Garry gave NCC so much of his time and energy that retiring from the board in 2016 felt like a shock. “I went from 100 miles an hour to zero in a matter of seconds,” he remembers. The charity had just launched the Ambassadors’ Circle to help keep former board members engaged, but Garry still wanted more.

This spring, Garry and former Ontario board chair Margaret Kelch put their hands up to be co-leads of NCC’s reinvigorated Ontario Ambassadors’ Circle. Working with NCC staff, they plan to establish formal and informal opportunities for current and former NCC board and committee members living in Ontario to network and stay informed and engaged in the charity.

Garry sums up his volunteer mandate in a sentence: “This is a place to call home for those wanting an insider’s connection to NCC, with less formal time and activity commitment.”