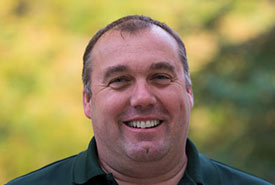 Celebrating a life of conservation

For some, the Nature Conservancy of Canada (NCC) is a dream job, for others it’s a passion.

For James Duncan, it was a way of life.

With a degree in marine biology from the University of Guelph, and already a few years of conservation work under his belt, James joined NCC in 1995.

For the next 23 years, as he moved through various roles as director of land securement, program manager for southwestern and northwestern Ontario, and finally as regional vice-president, James would touch hundreds of land securement and stewardship projects that would shape the future of land conservation in Ontario. 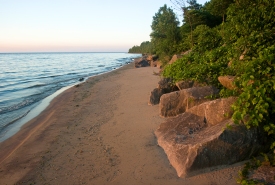 “Middle Island changed how we thought about conservation,” said James.

For more than 80 years, the 19-hectare (46-acre) island, a mere 100 metres from the border, had been in American hands. In 1999, this key piece of the Lake Erie archipelago, teeming with at-risk species found nowhere else in Canada, came up for sale and caught NCC’s attention.

NCC had only six weeks to come up with enough funds to make a bid on the property.

“We took a fishing boat out to the island with about 30 reporters,” said James. “They didn’t want to leave.”

The story caught on like wildfire. But it wasn’t the at-risk Lake Erie watersnake, nor the black-crowned night-heron that touched people’s hearts and made them open their wallets; it was their patriotism.

“People identified with the idea of the repatriation of this important piece of Canadian history,” said James.

“We never thought we could pull it off, but we did. It helped NCC to reaffirm that you never fail if you only try.”

Middle Island became a defining moment in James’s career, not only for its success but also for its small hiccup. For about 10 minutes or so, James experienced the most stressful moment of his career: he had misplaced the auction cheque. Luckily, after a frantic search, the money was found. It is a testament to his memory that staff still retell that story, laughing and smiling all the time.

Middle Island set the stage for what would become James’s signature — larger-than-life land deals and accomplishing what seemed impossible. 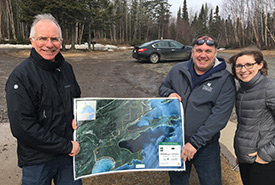 James Duncan at Big Trout Bay, ON (Photo by NCC)

Always looking at the big picture led James to search for the tough projects that most would never dare to tackle; one of these projects was Big Trout Bay Nature Reserve.

Located on the north shore of Lake Superior, the spectacular 1,018-hectare (2,500-acre) property was one of the last privately owned, undeveloped stretches of shoreline between Duluth, Minnesota, and Thunder Bay, Ontario.

“As I reached the summit at Big Trout Bay,” said James about his first trip to the area, “a peregrine falcon sped by, as though to welcome me. Looking out over McKellar point jutting into Lake Superior, there was no question in my mind that if we didn’t do everything we could to conserve this special place, the land would be chopped up and sold — maybe not immediately, but eventually. And once that happened, we’d lose some of the magic that makes this stretch of Lake Superior so mesmerizing.”

For more than a decade, James worked with partners on both sides of the border to protect this special place.

“Land conservation projects are seldom fast, and the Big Trout Bay project was no exception,” he said. “It took over 15 years for NCC and its partners to settle on a deal with the landowner and raise all the funds to buy it.”

In 2017, on a cold and windy March day, James saw his conservation vision realized with the permanent protection of Big Trout Bay, thanks to the generous support of the Government of Canada, through the Natural Areas Conservation Program, the JA Woollam Foundation, the Weston Family Foundation, the Margaret A. Cargill Foundation, the Bobolink Foundation, The Nature Conservancy’s Wisconsin and Minnesota programs, The Conservation Fund, Green Leaf Advisors, The Rogers Foundation and many individual donors in both the United States and Canada.

“It’s incredibly gratifying to be part of the land conservation movement in Canada, and to work with inspirational people who care so deeply about the land and species that define us as Canadians,” said James. “In the case of Big Trout Bay, I was humbled by the generous support we received from both sides of the border from people who recognized how important it is to protect our shared natural resources. The birds that migrate through Big Trout Bay to and from their winter homes in the south know no borders, a good lesson for those of us trying to protect these places.”

James’s expansive vision for the conservation of Ontario’s landscapes was one that he not only lived, but also instilled in the team of conservationists he mentored.

“We do what we do for the land and the species, but conservation is about people and empowerment," he said. "It’s about engaging Canadians.”

And for James, that empowerment started with his own staff. 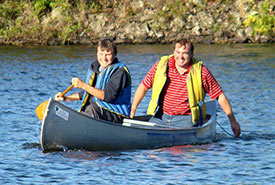 Chris Maher and James Duncan at Elbow Lake, ON (Photo by NCC)

“James corralled me into multiple jobs I didn’t think I was ready for,” said Kristyn Ferguson, program director for central Ontario west. “Every time I said, ‘No, but thank you for thinking of me, I'm going to stick with stewardship for a few more years’ he would answer, ‘No, I think you should apply for this role.’ No matter what argument I gave, he had a counter-argument, and eventually he won me over to his side. And five years later in the same role, it turns out he was right all along. James always provided me with the support I needed to be successful; he was a true mentor and leader.”

On January 15, 2018, NCC lost James Duncan suddenly. It was a true testament to his leadership and guidance that the team he had assembled in Ontario was able to soldier on after James’s passing. But not without a great deal of sadness. 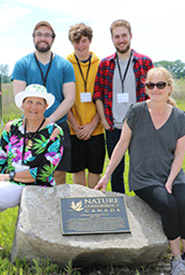 The Duncan family at the James Duncan Celebration of Life on Pelee Island, June 2019, ON (Photo by NCC)

Pelee Island was one of James’s favourite places in Ontario, and was an area on which he focused a lot of his time and attention. NCC has protected more than 405 hectares (more than 1,000 acres) on the island, many of them thanks to James’s leadership.

“With a wink and a smile, James’s creative risk-taking resulted in amazing land deals that have protected some of Ontario’s most precious natural spaces, including Pelee Island,” said Wendy Cridland, director of conservation, Ontario.

So it was not surprising that Canada’s most southerly inhabited island was chosen for James’s celebration of life.

On a warm sunny day in early June, family, friends, board members, staff and donors gathered to honour James and unveil a special memorial plaque on the Florian Diamante Nature Reserve on Pelee Island.

“Because of his personality, his charm, and his total dedication to our work in conservation, he achieved great things,” said John Grandy, Ontario regional board chair at the event.

As part of a living memorial to James’s conservation work in Ontario, trees will be planted across Ontario on 23 properties that he  had a hand in conserving — one for every year of James’s career with NCC. In September of 2019, NCC will officially open the James Duncan Nature Trail, a 9.8-kilometre hike through the rugged forests, shorelines and cliffs of Big Trout Bay Nature Reserve. 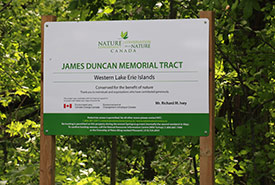 “Above all, James was a devoted dad, husband, son, brother and friend,” said Dana Kleniewski, NCC’s director of development and communications for Ontario. “We hope that there’s some measure of comfort for his loved ones in knowing that he will forever be remembered throughout the province at many of the amazing properties he helped to conserve.”

“James Duncan’s work will last more than 2,000 years. It will last forever,” said John. “He worked diligently for his entire life to protect the wilderness of Ontario forever. How many of us can say that we have done something that will stand the test of time?”

James dedicated his life to conservation of Ontario’s most important natural spaces and the species they sustain. And it is thanks to him that future generations will enjoy these special places. His legacy is one that his family can be proud of and that all Canadians should be inspired by.

“It always makes me proud, as a Canadian, to see people come together to do something big,” said James. “I think future generations of Canadians will be grateful not only for what society builds today, but for what we conserve for the future.”