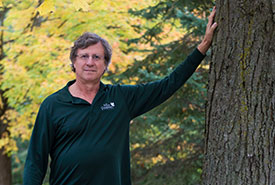 John Grant: A legacy of a quarter-century of service

“If you like something, you want to stay with it.”

John Grant, former program director for midwestern Ontario and the Nature Conservancy of Canada’s (NCC’s) longest-serving employee, reflects on his career in conservation and what the future holds for the next chapter of NCC’s story.

Twenty-five years ago, in a stuffy little office above a laundromat in the east end of Toronto, John Grant began his decades-long career with the Nature Conservancy of Canada.

“It was a very small organization. I was the seventh employee,” says John about his early days with NCC. “As I recall there wasn’t air conditioning. If you opened the window to get a bit of air circulation, chances are you would end up with the smells of the laundromat coming in and overpowering the office,” he laughs.

John first heard about NCC by reading an article in the newspaper. With degrees in economics and wildlife biology, it sounded like the perfect organization for his combination of talents and interests. “I wrote a letter — back then we wrote letters — and I just sent it in on spec,” he says. Half-a-year later he started with NCC as a projects coordinator. 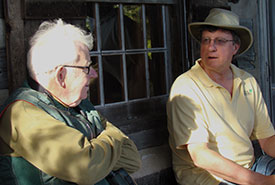 Unlike today, back in the 1990s NCC had only two offices — one in Toronto and the other in Calgary. “It took several years to get to the point where there were offices in every region,” says John. “I was lucky to be involved in projects across the country, because we didn’t have staff elsewhere, except Alberta.” He worked on a number of projects, including the donation of a large tract of old-growth, red spruce forest in Nova Scotia, the first conservation covenant in British Columbia, Minesing Wetlands in Ontario and the Old Man on His Back project in Saskatchewan.

While John doesn’t have a favourite project, “I have a hard time picking favourites,” he says, several stand out in his mind. One of those is Cockburn Island.

“The opportunity to protect over 8,090 hectares, over half of a large, forested island, and work with community groups was a unique experience,” reflects John. “There was a lot of consultation and it turned out to be a group effort in the end. The community and NCC pulled together for that project.”

But it wasn’t just the projects that made John’s career memorable, it was also the people.

“At NCC, we’re very focused, driven and results oriented. It’s all about protecting special areas and ensuring that all the wildlife will be there for future generations, but there is certainly a people aspect to what we do” says John. “You get to meet some interesting, conservation-minded people, whether it’s other staff, donors, land owners or people from corporations.” 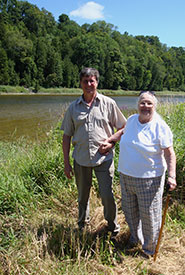 Johnhas fond memories of the donors he has met over the years. While working in the Goderich, Ontario, area, along the shores of Lake Huron, he got to know a supporter of NCC’s work in the Lower Maitland River Valley. She would invite John over to lunch whenever he was in the area to chat about many things, including the status of NCC’s work. Over the years, the two became friends. After she passed away, John was surprised and touched to find that she'd left a large gift in her will to help NCC buy and care for more land along the riverfront she loved.

Exciting projects, interesting people and a satisfying career — all the reasons that GJohn stayed with NCC for so long.

“It’s a compelling mission, which means it’s a compelling job and a satisfying job,” says John. “And working with people who share the determination and passion for conservation was a real plus.”

This past January, at the age of 65, John decided to retire, stepping aside to let the next generation of conservationists take the reins.

Wendy Cridland, NCC's director of conservation, worked with John and acknowledges his depth of knowledge about the organization.

“It has been a pleasure working closely with John over the last few years,” says Cridland. “He has so many years of experience in creative approaches to land conservation. His calm, gentle manner and ability to patiently work through some major, complicated conservation projects, while maintaining positive relationships throughout, will be deeply missed.”

So what does the future hold for NCC, according to John? Both challenges and continued success.

“NCC is much better known than it was 25 years ago, but I think there’s more to be done in that regard,” says John. “The more people that know about the need for conservation and the ways that they can help, the more NCC and other groups will be able to accomplish in our race against time.”

“It comes down to the creativity of the organization and our ability to engage with others,” John goes on, “starting with individuals, First Nations, other organizations, and corporations for that matter, becoming aware of the need for conservation and opportunities for collaboration so that all the species that we have now are here for the next generation and the generations to follow.”

Yet despite the challenges that face conservation in Canada, including habitat loss, species extinction and climate change, John thinks NCC is on the right path.

“If the Nature Conservancy of Canada's trajectory of conservation success continues on the course it’s been on for the last 25 years I think we are in great shape.”