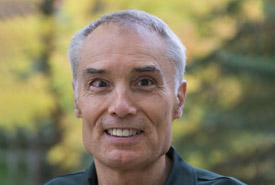 
A friend and real mentor, Howard Hamilton has been at the legal tiller of the Nature Conservancy of Canada's (NCC's) Ontario Region for 21 years. Through hundreds of land deals, partnership agreements and contracts, he has guided the organization on conservation projects across the country. And he navigates the complexity of all of this with patience and a dash of humour.

Here are some reflections from staff who had the pleasure of working alongside him:

"Howard has been a real mentor to me over the years. Way back when I moved from a communications role into a program manager position, I was really nervous about getting up to speed on the securement work. It was Howard who taught me the ropes. One of the best pieces of advice he gave me - and I have passed on to many staff who are taking on new challenges that may seem beyond their skill set - was: "Give it a year before you make any decisions, or judge yourself too harshly, just give it some time." Sage words that I pull up in my mind anytime I am feeling anxious about new challenges. Going to miss that guy!" - Erica Thompson, Senior Director, Conservation Engagement 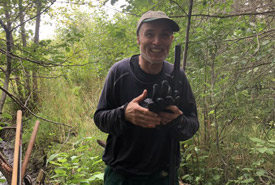 "Howard had asked a number of serious questions about property management of the Oak Grove reserve in Rainy River. It has a significant oak population and therefore many bears. He had answered all of the legal questions but then returned with his own line of inquiry, asking very serious-sounding questions about the bears: "What are the considerations for bears traveling from Minnesota? Are they known to consume more acorns than Canadian bears? How is cross-border travel accounted for, particularly for the tastiest acorns?" I laughed for days. He always got the job done and then made you laugh at the end of it. What are we all doing if not having a laugh at work, right?" - Kristyn Ferguson, Program Director, Ontario Large Landscapes Project

"Howard has also been my mentor since I started with NCC more than 15 years ago, working out of a satellite office in a church basement in Arnprior, Ontario. I've talked with him and thanked him for his help, almost every week since then. (Howard keeps telling me to stop thanking him...). He has been like ground control in Houston, guiding and advising conservation staff as we, quite literally, boldly went where we've never gone before." - Mark Stabb, Program Director, Central Ontario

The NCC family and supporters who have had the pleasure of working with Howard will miss him as he pursues new endeavours in retirement. May his tenure and legacy in NCC inspire more good work in the years to come.