Black Bay on the eastern Georgian Bay coast, ON (Photo by Kas Stone) 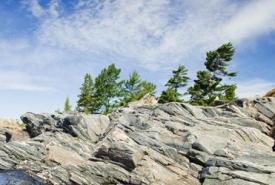 As captured in iconic paintings by the Group of Seven in the early 1900s, the Eastern Georgian Bay Coast is an integral part of Ontario's heritage. The area includes incredible views of the Canadian Shield. It is one of North America's most exquisite and distinctive landscapes.

The mainland coastline features rocky shores, deep cut bays, wetlands and cobble beaches. The coast is protected by the largest archipelago of freshwater islands in the world.

With a total coastal length of more than 5,300 kilometres, including mainland and islands, the Eastern Georgian Bay Coast features many attributes that are unique to the Great Lakes basin. This includes the greatest number of islands (more than two thirds of all islands in the basin), the longest coastline, the highest quality wetlands and the most extensive coastal rock barrens.

The high biodiversity values of this area make it a top conservation priority.

The coastal wetlands of the Eastern Georgian Bay Coast Natural Area, such as those found on Sandy Island, provide important habitat for colonial nesting waterbirds. They also have one of the highest densities of globally and nationally rare species and communities in Ontario.

The area also contains two Important Bird Areas. Migratory waterfowl, shorebirds and land birds concentrate along the coast in the spring and fall.

The coast shelters many vegetation communities, disjunct species and breeding birds. It also boasts the greatest diversity of viable reptile populations in Canada. In addition, the area provides habitat for many at-risk snake and turtle species, and Ontario's only lizard, the five-lined skink.

The coast contains a large variety of documented vegetation communities, disjunct species and breeding birds. It also boasts the greatest diversity of viable reptile populations in Canada. This includes many at-risk snake and turtle species and Ontario's only lizard, the five-lined skink.

Important amphibian populations, such as salamanders, frogs and toads also make their homes here. Wide-ranging and space-demanding species such as black bear, fisher and eastern wolf are relatively common.

Threats to these areas include marinas and recreational homes, invasive species, water pollution and degradation, direct persecution of wildlife species and incompatible recreation such as the use of ATVs (all-terrain vehicles).

While there has been significant conservation of public lands within the area, many important places, particularly in southern regions, are not protected.

Georgian Bay Islands National Park was established in 1929. The park protects the unique features in the southern portion of the bay. The global significance of the area was recognized in 2004, when the Georgian Bay World Biosphere Reserve was established.