Flats for fish: Building habitat on the Mad River 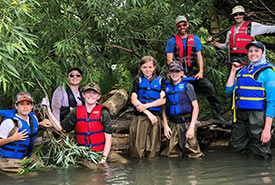 If you’ve ever been to the Minesing Wetlands, then you know what an aquatic paradise one of southern Ontario’s largest and least disturbed wetlands is. Its peaceful silence is broken only by the trumpeting of geese, the trilling sounds of swallows, sparrows and warblers and the soft drone of insects.

Dubbed the "Everglades of the north," the 10,937 hectares (27,025 acres) of wetlands, fields and forests teems with wildlife, just like its Floridian counterpart. Snaking through its softly waving reeds and cattails are several watercourses, including the Mad River, Willow Creek and Nottawasaga River. Typically, each spring these rivers and streams flood, causing the entire area to transform into a watery oasis.

But changes in precipitation and storm events have taken their toll on the Minesing Wetlands.

The Mad River, a major migratory route for trout and salmon, jumped its banks. This caused the river to short-circuit and water to flow through old agriculture drainage channels and into a roadside ditch, before flowing into the Nottawasaga River, cutting 12 kilometres off its usual route. This caused parts of the Mad River to become sluggish and slow, increasing sediment in the water and reducing habitat for fish, turtles and other aquatic species.

The Nottawasaga Valley Conservation Authority has been working to restore the flow back to the Mad River. In 2018, a contractor was hired to clear some of the woody debris out from the main channel so that the flow could be restored.

But more work still needs to be done to return the river back to prime real estate for the salmon, trout, turtles and other species that call the Mad River home.

So on a warm summer’s day in July, 15 intrepid Nature Conservancy of Canada (NCC) Conservation Volunteers, staff and interns embarked on day one of a three-day adventure to build some much-needed fish apartments.

Armed with canoes, waders and tools, staff and volunteers worked to anchor logs and branches to the river bank. 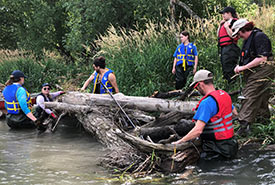 “Woody debris provides fish with places to hide, rest and feed,” says Brittany Hope, conservation biologist with NCC for the Minesing Wetlands. “The logs and branches act as attachment points for things like algae that add oxygen to the water that help improve fish habitat over time. The debris also provides perching and basking habitat for turtles, reduces stream bank erosion and sedimentation.”

Sediment, says Brittany, reduces visibility for fish and smothers their eggs, making it impossible for them to nest. It also reduces the quality of drinking water downstream, making the restoration work critical for both humans and fish.

Each day, the volunteers paddled further than the day before. The group stopped at natural gathering points in the river where branches and other debris typically collect. Volunteers would then hop out, gather up the debris and anchor it to the embankment using cables and anchors.

“Volunteers had a really good time, even as they were falling in and getting water in their waders,” says Brittany. “We didn’t see any fish, but you could feel them. Maybe the most exciting part was feeling fish bump into your waders and knowing that they were going to have new homes in the fish apartments we were building.”

Since 1974, NCC and our partners have protected over 5,500 hectares (13,600 acres) in the Minesing Wetlands, many of which are now owned and managed by NCC’s primary partner on the landscape, the Nottawasaga Valley Conservation Authority. We have been able to continue to steward and care for this important landscape thanks to the support of organizations like Ontario Power Generation. To learn more about NCC’s work in the Minesing Wetlands, click here. To volunteer for a Conservation Volunteers event, visit conservationvolunteers.ca.