Help bluebirds in your own backyard 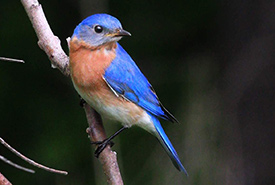 Hazel Bird was an all-around naturalist, outdoor educator and conservationist who was committed to the recovery of the eastern bluebird, which was placed on the endangered species list in 1981.

Hazel installed over 400 bluebird nest boxes that she diligently maintained and monitored with the help of volunteers for more than 40 years. Though she inspired hundreds of others with her dedication and love for nature in Northumberland County, her greatest accomplishment came in 1996 when the Committee on the Status of Endangered Wildlife in Canada (COSEWIC) announced that the eastern bluebird was no longer considered a species at risk! 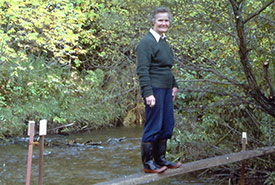 With the help of Hazel’s original plans, you can now build your very own bluebird nest box at home!

In Ontario, eastern bluebirds typically nest from April to August, frequently raising two broods. Nest boxes should ideally be installed in grassland habitats before nesting season begins. Bluebirds hunt by sitting on a perch and dropping down to the ground on their insect prey; therefore, it is important that the nest box is installed in an open area. 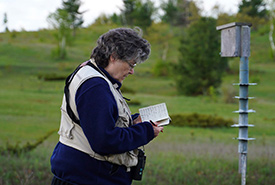 Eastern bluebirds typically have more than one successful brood each year. Young raised early in the spring usually leave their parents in summer, but young raised later in the season will often live with their parents throughout the winter. Old nests should be cleaned out of the box as soon as fledglings leave so that it can be used to raise a second generation. The front panel of the nest box was designed to open upwards for ease of cleaning. 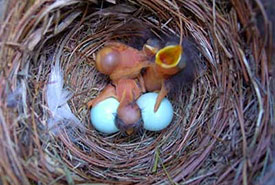 A male will attract a female to his chosen nesting site by carrying nesting material in and out of the hole, perching and fluttering his wings. The female conducts all of the nest building. She will weave together a deep cup of grasses and pine needles and occasionally animal hair or feathers.

Number of broods: 1-2 per year

Appearance after hatching: Mostly bare, except for sparse tufts of gray down, eyes closed.

When monitoring your bluebird box, it is best not to disturb the birds. Monitor from a distance, and don’t open the box up during the season.

The eastern bluebird at a glance 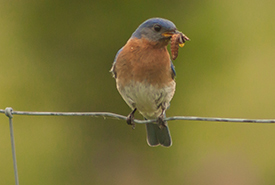 Conservation status: Least concern (Ranked by the International Union for Conservation of Nature)

In the early 20th century, eastern bluebird populations significantly declined, as invasive species such as European starlings and house sparrows took over available nesting cavities, making it difficult for bluebirds to breed. In the 1960s and 1970s, the formation of bluebird trails, as well as other nest box projects, alleviated much of this nesting competition, especially after nest boxes like Hazel Bird’s were designed to exclude the larger European starling. Eastern bluebird numbers have been recovering ever since.