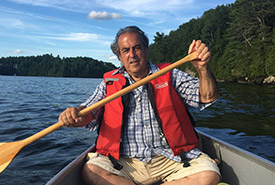 An island on Lake Memphremagog has a guardian angel

Andrew Howick is a guardian of Molson Island. Here is his story:

Once upon a time, there was an island called Molson Island, an ecological jewel in the middle of a lake in the Eastern Townships. Peaceful with its hidden natural wonders, it was difficult to imagine that it could one day be altered. Having heard that the island was indeed being considered for development, a kind-hearted person living on the shore of the lake began to think of ways he could help protect it.

Andrew Howick loved this island that he saw every day. It was his neighbour across the way and he was very attached to it. Also, Andrew’s father had passed on to him something priceless: the importance of giving back to future generations.

Andrew and his neighbours decided to purchase the island to protect it from development which would probably have degraded the natural environments it shelters. Over the years and through a variety of circumstances, Andrew purchased parts of the island that were owned by his neighbours until he was the sole owner. He took great pleasure in the island’s beauty, sometimes travelling there by boat to admire its rich splendour with his children, grandchildren and wife. 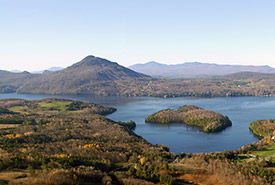 Molson Island and its owner lived in happiness and mutual respect for many years, until one day Andrew began to think about selling the island and about its future. What would happen to it in a few decades? Would others come to take it over and damage it? He worried that he had only given this beautiful landscape a reprieve of a few years, when he heard about the Nature Conservancy of Canada (NCC) which could ensure its protection.

He thus offered NCC this land that he had watched flourish along with his family. It was with great pride that he made this gesture, knowing that his children and grandchildren would be equally proud.

“This island is a true gem of nature and it would be a great loss if its natural diversity were to be compromised in the future,” says Andrew. “This donation is my gift to future generations. My greatest hope is that by acting collectively, we will be able to pass on a healthy environment to our youth.”

Nestled within Abenaki traditional territory, Molson Island will, too, stand the test of time. And that's what Andrew did: he allowed a pristine island to live on, protected.

Thank you to the donors who made this dream possible

Private donors who have helped protect the site, including community members living around the lake

To find out more

Pristine island added to protected lands in the Eastern Townships