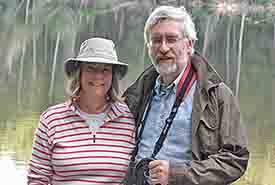 NCC has been fortunate enough to spend, on many occasions, some quality time with two committed donors in Quebec, Mr. Richard Gregson and Mrs. Jean Harwood. Learn about their affinity for nature and what kind of legacy they hope to leave.

When did you first begin your involvement with the Nature Conservancy of Canada?

RG:  Hard to say, but it can’t have been long after we came to live in Canada in 1998. I think we were looking for something akin to the National Trust in Britain of which we had long been members.

JHG: Obviously since we came to Canada in 1998, probably through Bird Protection Quebec, hearing NCC referred to and wondering, who are these guys? The relationship seems so strong it’s hard to remember when it started.

What motivates you to stay involved?

RG: That’s simple - of all the conservation charities we have looked at (and sometimes contributed to) it is clear that NCC is run by people with their feet on the ground and gets things done in a practical and pragmatic way. Nice people too, we have to say, very nice people.

JHG: Agreed, it’s a charity which is big enough to have a proper structure to achieve their aims but small enough to remain personal friends.

How would you describe the Nature Conservancy of Canada to others?

RG: There’s an organization out there that has a clear vision of where it is going, achieves what it sets out to do and is more likely to leave a lasting legacy than a lot of other groups that are big on dreams but less so on how to achieve them.

JHG: A charity with vision but organizational abilities too, even dare one say, business sense as in the ability to take a pragmatic view about relative values.

What would you like to pass on to future generations?

RG: The richness of habitat and species not only that we grew up with (we can see the losses in our life time) but that previous generations enjoyed. More wilderness open and free for everyone to wander in.

JHG: I grew up encouraged to enjoy nature, spending a lot of time playing outdoors. I would wish this for all children. It provides a healthy basis for growth and mental balance.

How does philanthropy reflect your values?

RG:  I think it’s the other way around - values affect philanthropy.

JHG: For me philanthropy is one of the best ways of expressing my values.

As bird lovers, what is your favourite bird?

RG: I will be hated for this by North American naturalists but it’s the house sparrow: a species that has lived and travelled with humans for about 7,000 years since we stopped wandering and started farming for a living. I grew up with them and would not want to live in a world without sparrows. (If that isn’t politically correct in conservation circles, then the northern harrier).

JHG: I’ve often been asked this and never come up with a single species, probably waterfowl - I love the displays and elegance of great crested grebes and avocets but in Canada, probably the common loon: that unearthly cry and magnificent diving and swimming. But then, I have wonderful memories of family lines of common mergansers appearing out of the early morning mist and swimming past the dock at Kenauk…