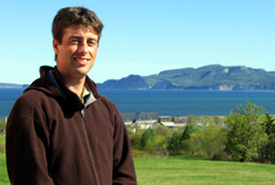 Hubert Pelletier joined the Nature Conservancy of Canada team in 2002. As acting director of government relations and partnerships, Hubert collaborates with a multidisciplinary team of 30 staff in the protection of Quebec’s sensitive natural habitats. A geographer specializing in the environment (McGill 2001), he is motivated by the challenge of promoting the sustainable connections between humans and nature.

Hubert has been responsible for developing and implementing conservation strategies for natural habitats on private lands. His expertise and background have allowed him to successfully undertake conservation projects involving scientists, local community authorities, municipalities, landowners, organizations, governments and more.

Hubert’s love for the mountains and wilderness led him to travel through the Andes, Himalayas, Rockies and Alps before launching his career in conservation. As a former project manager in Latin America, he has acquired considerable expertise working within several organizations with both strong environmental missions and international reputations.

In his spare time, Hubert enjoys river paddling and other outdoor activities, such as skiing, cycling and hiking.