History and art: Protected areas at both ends of île aux Grues 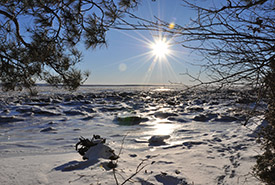 Downstream from Île d'Orléans, in the Montmagny sector, where the water of the St. Lawrence River begins to turn salty, lies the Isle-aux-Grues archipelago. It includes 21 islands, only two of which are accessible to the public: Grosse Île and the better known Île aux Grues. The latter is, despite its name, the bigger of the two and measures seven kilometres long and two kilometres wide. You can get there from Montmagny with the ferry service MV Grue-des-Îles. 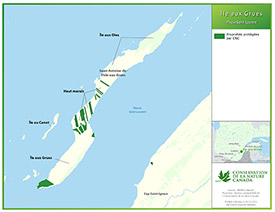 The Nature Conservancy of Canada (NCC) is proud to protect 170 hectares of natural area on Île aux Grues, nearly one-twelfth of its area. From the upper marshes, which hold the secret of delicious cheeses, to the Jean-Paul-Riopelle nature reserve, the natural and cultural heritage of this island gives it a well-deserved reputation as a tourist destination.

From seigneuries to tourism 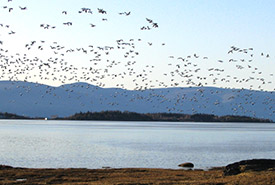 In 1646, Charles Huault, Sieur de Montmagny, was granted the seigneury of the Rivière-du-Sud, which included the lands bordering the river at its mouth (where the town of Montmagny is located today), as well as Île aux Grues and Île aux Oies. Since the two islands are connected by tidal flats, they often appear to be a single island. The following generations shared these islands until 1671, when Île aux Grues was sold as a seigneury to Pierre Bécard. 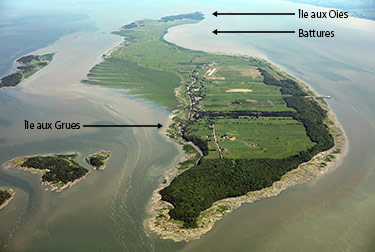 At that time, the name of the island came was in reference to the large herons present on it, which the inhabitants had mistaken for cranes ("grues" in French). Ile aux Oies was purchased by the nuns of the Hôtel Dieu de Québec (which was a blessing for their community since the farmers, hunters and fishermen paid them half of their earnings!), then acquired in the late 1960s by a private hunting club, and finally by André Desmarais and Marc Séguin, who are the current owners.

Economic development of the island owes its success to the natural environment that links the two islands: the tidal flats. These tidal flats allow the cultivation of eelgrass, an excellent food for cattle. Cows mean milk, and milk means cheese! Have you heard about the Fromagerie de l'Île-aux-Grues? Around 1900, it was necessary to find an alternative to conserving milk. Living on a small island is a disadvantage when you sell a perishable product and you have to travel to the mainland by canoe to sell the goods. The resourceful islanders solved this problem by making cheese, for which the island became very well known. While the island is much more accessible today by plane and ferry, the art of cheese-making has endured and is an important tourism draw on the island. 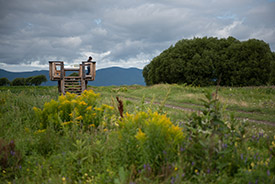 NCC protects a portion of the upper marshes at the eastern tip of the island, where even today some farmers carry on practicing sustainable seagrass farming. Their respect for nature and their relationship with NCC make them valuable conservation partners. The landscape is quite unique and well protected. Thanks to observation platforms installed in 2021, it is an ideal spot to contemplate the blend of natural and human history. Watch our videos to learn more about the protected nature in the tidal flats area. 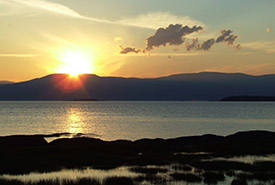 The western tip of the island, known as Jean-Paul-Riopelle Nature Reserve, has also been protected by NCC. The 200 or so species of migratory birds and the plants unique to this region are a great attraction for nature lovers. Painter and sculptor Jean-Paul Riopelle lived here for more than 10 years, drawing inspiration for his work from this extraordinary natural environment. He passed away on this island in 2002.

The Jean-Paul-Riopelle Nature Reserve, at Pointe aux Pins, is a tribute to the life and work of the artist who is considered one of Canada's greatest painters. His fame and the paintings inspired by the local landscapes and wildlife have helped make this corner of paradise famous. The reserve speaks for itself, and the striking beauty of its nature is worth the trip.

So, if you are visiting the region, plan for a stop at the nature reserve; its entrance is only just over five kilometres from the upper marshes.