Protection of the Bromont Summits Park

The Nature Conservancy of Canada (NCC), in collaboration with its partners, protects 17.5 hectares (43.2 acres) of a very valuable forest on Mt. Bernard, one of the peaks of Mount Brome, in Montérégie.

This property is part of the vast 186-hectare (459-acre) Bromont Summits Park (the equivalent of 90 per cent of the area of Mount Royal Park), managed by the City of Bromont and the Société de conservation du Mont Brome (SCMB). The preservation of this park contributes to conserving the largest forested area in the Bromont region.

“We are impressed by the level of commitment to protecting natural environments that this project has generated. In recognizing the importance and the value of the ecological assets on its territory, the community has shown its collective wisdom. We wholeheartedly support this project, which will benefit everyone, today and in the future. Through the builder campaign, we are asking for a final push to bring this commitment to life,” they stated jointly.

An exceptional site within the Montérégie Hills 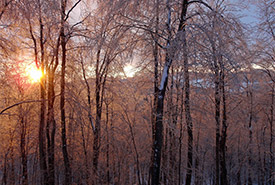 At 553 metres, Mount Brome is the second highest peak of the nine Montérégie Hills. Their unique geological formation is the result of magmatic intrusions into the Earth's crust. Over time, these intrusions have been discovered as a result of the erosion of the surrounding sediments. Mount Royal, Mt. Saint-Bruno, Mt. Saint-Hilaire, Mt. St-Grégoire, Mt. Shefford, Mt, Yamaska, Mt. Mégantic and Mt. Rougemont are the sisters of Mount Brome and are all protected in their own proportions.

The venerable age of the Montérégie Hills is estimated at about 125 million years. The exceptional forest ecosystem of Mount Brome is home to many species, including purple salamander, which is designated as threatened in Canada and vulnerable in Quebec, and butternut, a tree considered endangered under Canada's Species at Risk Act and likely to be designated threatened or vulnerable under Quebec's Act Respecting Threatened or Vulnerable Species.

While conservation of the Montérégie Hills is a provincial priority, this project increases the area of protected woodlands within Mount Brome.

A park for everyone

Protection of the rich natural environments of the Bromont Summits Park was preceded by nearly four years of awareness-raising and negotiation. NCC's associate vice-president in Quebec, Joël Bonin, emphasizes the crucial role played by the community in safeguarding and enhancing the last major undivided forest on Mount Brome. “[The community] was heavily involved in the official fundraising campaign and demonstrated its commitment to this remarkable site," he said. "We are proud to have been able to help preserve this jewel of biodiversity!”

An agreement for the Summits Park

This securement is part of a larger project led by Bromont and the SCMB, to which NCC has contributed $1.6 million, in part from the federal and provincial governments, to protect the Summits Park in perpetuity. The SCMB is, as a result, the beneficiary of a conservation easement on the lands of the city of Bromont.