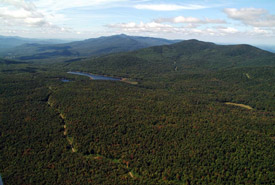 Located just an hour’s drive from Montreal, the Eastern Townships boast large lakes, picturesque villages and green mountaintops. In the heart of this cottage country is the Nature Conservancy of Canada’s (NCC’s) Green Mountains Nature Reserve. It is the largest privately held conservation area in Quebec.

“I am delighted that all the mountain peaks visible in the region are now protected, thanks to NCC and the work of its partners,” states Nathalie Zinger, NCC’s former regional vice-president in Quebec.

Several of these mountains are part of the Green Mountains Nature Reserve. This reserve is not only one of the last natural areas to remain intact in southern Quebec, it is also one of the most important connectivity zones in the Appalachian range. The Appalachian range extends from the state of Georgia through Quebec to Newfoundland. Home to an abundance of habitats and species, this area is a priceless natural treasure.

It took 10 years to complete the Green Mountains Nature Reserve initiative. NCC’s first acquisition was made in 2001, in the Sutton Mountains, with the assistance of Appalachian Corridor and thanks to funding from partners such as the Fondation Hydro-Québec pour l'environnement. In 2004, following a major publicity campaign, NCC extended its holdings in the area with lands formerly belonging to Domtar. These lands were acquired thanks to the gift of land and the financial participation of the Government of Quebec, as well as various donors and foundations. Today, the nature reserve sprawls over 78 square kilometres (7,800 hectares).

The protected area is big enough to conserve the ecosystem’s diversity while also providing adequate habitat for a number of large mammals, such as black bear, bobcat and moose. It also shelters more than 20 species of at-risk plants, including two-leaved toothwort, large-flowered bellwort and maidenhair fern. The reserve is home to several birds of prey. Barred owl, peregrine falcon and broad-winged hawk are found here, as well as 80 species of breeding birds. Birch, beech, ash and maple dominate the deciduous forest. At its highest altitude, the mixed-wood forest features mainly fir, spruce and birch.

NCC provides public access to this nature reserve, while ensuring its long-term protection. In fact, the Green Mountains Nature Reserve is accessible to the public through three networks of hiking trails:

Access is provided through three points of entry, with each parking lot giving access to one of the three peaks. Interpretive material about the area’s natural environment is available on the nature reserve’s website (in French only).

The conservation efforts in this Appalachian corridor extend well beyond the Green Mountains Nature Reserve, thanks to the work of 16 conservation groups, who together protect over 13,300 hectares (32,800 acres) of land. NCC will continue to work with our local and regional partners to ensure the long-term protection of this green, mountainous landscape that is so characteristic of the Eastern Townships.

A master plan (in French only), which combines accessibility and protection of the territory, rallies more than 20 regional partners around a common vision for conservation, research and discovery, as well as the region’s economic development.

Participate in the protection of this natural area!

See below for directions:

Parking of the chemin de la Falaise in Sutton