The treasures of coastal habitats 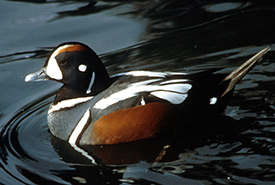 For more than 15 years, the Nature Conservancy of Canada (NCC) has ensured the long-term protection of exceptional natural sites throughout the Gaspé Peninsula, more specifically in the Point St. Peter (Pointe Saint-Pierre) and Malbaie Salt Marsh areas. To date, these efforts, led in collaboration with local and regional partners, have enabled the protection of more than 500 hectares (1,236 acres) here, providing important habitat for 28 species at risk.

The Gaspé Peninsula is considered a biodiversity hotspot in Quebec. The area is renowned for its remarkable habitats, which are home to several species at risk and feature rare ecosystems. Shaped by the proximity of the Gulf of St. Lawrence, the coastal wetlands — considered the largest, most diverse and most intact on the Gaspé Peninsula — are fed by fresh water from rivers that are internationally recognized for their Atlantic salmon populations. In mixing with the salt waters of the Gulf of St. Lawrence, fresh water from the rivers creates four estuarine lagoons covering an area of 2,850 hectares (7,042 acres). This priority natural area also encompasses three Important Bird Areas.

The Malbaie Salt Marsh: Internationally recognized for its ecological riches

The term "salt marsh" describes a stretch of water separated from the sea by a sandbar. At high tide, an opening in the sandbar permits the salty sea water to mix with the fresh water. The resulting variation in salinity explains the salt marsh’s diverse habitat.

Already the owner of more than 20 properties and conservation agreements in this area, including 15 private salmon pools and four kilometres of shoreline along a salmon river, NCC recently protected 150 acres (60 hectares) by acquiring four properties in the Bridgeville and Barachois areas. The newly conserved areas are all located close to areas already protected by NCC and are mostly covered by relatively undisturbed forests or wetlands. Their securement will consolidate more than 470 hectares (1,160 acres) protected by NCC in the Malbaie Salt Marsh and along the Malbaie River, improving connectivity between the various habitats in these sectors. NCC’s conservation efforts aim to maintain the quality of the surrounding ecosystems through scientific study, land management and outreach.

Point St. Peter: A critical habitat for thousands of birds

Located halfway between the towns of Gaspé and Percé, Point St. Peter conceals important heritage and natural areas that provide habitat for thousands of seabirds. This site has been designated an Important Bird Area because of its large flocks of birds.

In recent years, NCC has worked to make the site accessible to nature enthusiasts. A hiking trail and interpretive panels allow visitors to appreciate Point St. Peter’s unique qualities as well as its rich natural diversity. In the heart of the area sits LeGros House, renowned for its incomparable historical value and protected by NCC since 2007.

With the recent acquisition of the Green Point, NCC now protects more than half of Point St. Peter. One of the region’s only intact coastal forests, Green Point is among the most beautiful areas on the Gaspé Peninsula.

The Nature Conservancy of Canada thanks the public and private financial partners who have contributed to the protection of the Gaspé Peninsula Coastal Habitats natural area, especially: