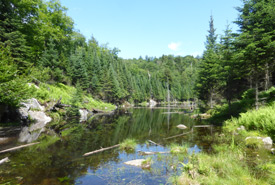 Deep in the heart of the Laurentians lies the Barbara-Richardson Nature Reserve, a haven for wildlife.

The Barbara Richardson Wildlife Foundation was created in 1969 to hold ecologically significant land that the late Barbara Richardson wished to protect. The area, now jointly acquired by the Nature Conservancy of Canada (NCC) and Conservation Manitou in 2018, is located in Saint-Faustin‒Lac-Carré. This natural corridor links a network of existing protected areas. It increases connectivity for wildlife species that rely on this area. Conservation Manitou and NCC also have nature reserves around Lake Manitou and near Lac Brulé totalling 549 hectares (1,357 acres).

This newly protected 219-hectare (541-acre) site features two lakes: Lac Caché and Lac en Cœur. It also has wetlands, numerous streams and ponds, several mountaintops and a deep valley. The area is home to many plants and animals.

The protection of this corridor is a high priority, as it crosses Highway 117, which is a significant obstacle to wildlife movement.

Wildlife here includes ruffed grouse, common gartersnake and pickerel frog. This latter species is likely to be designated as threatened or vulnerable under the Quebec Act Respecting Threatened or Vulnerable Species (ARTVS). The wetlands are key habitat for many species of amphibians and waterfowl.

The property is also home to butternut, an endangered tree species under Canada’s Species at Risk Act and likely to be threatened or vulnerable under the ARTVS.

In additional to helping maintain an east-west ecological corridor in the region, the Barbara-Richardson Nature Reserve is also strategically located, as it is next to the 1,768 hectare (4,370-acre) Centre touristique et éducatif des Laurentides. It is also approximately five kilometres from the 748-hectare (1,850-acre) Jackrabbit Ecological Reserve.

The Nature Conservancy of Canada and Conservation Manitou wish to thank the Ensemble pour la nature project of the Ministère de l’Environnement et de la Lutte contre les changements climatiques du Québec, the Government of Canada's Natural Areas Conservation Program and the North American Wetlands Conservation Act, administered by the U.S. Fish and Wildlife Service, along with the many individuals who made this key conservation project possible.