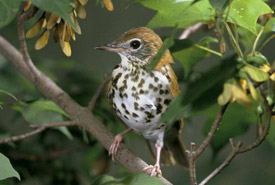 At Sainte-Agathe-des-Monts and Ivry-sur-le-Lac, the Nature Conservancy of Canada (NCC) protects a network of natural environments totalling 350 hectares (864 acres). They include the William R.-J. Oliver Reserve and the Ivry Wildlife Crossing property.

The William R.-J. Oliver Reserve is located in the Lac Brûlé area, approximately 100 kilometres northwest of Montreal. It contains typical Laurentian forests, including sugar maple groves and yellow and white birch stands. These wooded areas are home to smooth greensnake, which is likely to be designated threatened or vulnerable under the Quebec Act Respecting Threatened or Vulnerable Species. 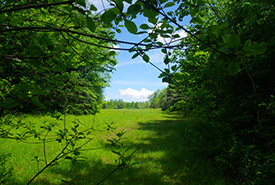 The Reserve’s wetlands provide essential habitats for many amphibian species, such as green frog, wood frog and bullfrog. A large number of bird species have also been identified in the area by the Quebec Breeding Bird Atlas. One example is wood thrush, a threatened species according to the Committee on the Status of Endangered Wildlife in Canada.

The Reserve is crossed by an inter-village trail, managed by the organization Par monts et vals and dearly loved by hiking enthusiasts.

This 27-hectare (66-acre) property, located along Route 117, is home to many plant species, including sugar maple, yellow birch and balsam fir, as well as a large number of animal species such as coyote, moose and waterfowl. 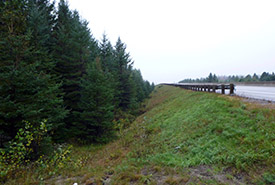 Connectivity, an essential principle for the survival of species

This acquisition is a part of a larger-scale wildlife corridor project; NCC is working with many partners to protect and expand ecological corridors across the province.

An ecological corridor is a natural land or water passage linking natural areas together, allowing wildlife to move around and flora to disperse. Species with large home ranges, such as black bear, Canada lynx and white-tailed deer, require large areas to feed and reproduce. 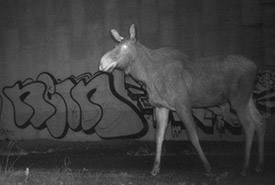 Maintaining ecological corridors between natural environments also helps prevent species loss; the chances of animals and plants being isolated from their natural habitat due to, for example, human infrastructure, are reduced.

Road safety for all

The Ivry Wildlife Crossing property is strategically located along Route 117. NCC’s goal is to develop a wildlife crossing that will reduce collisions between motorists and animals.

Wildlife crossings allow wildlife to cross some type of infrastructure, usually a road. Roads represent major barriers for several species, who are frightened by vehicle noise and unaccustomed to the hardness of the pavement. Animals that do venture across roads can be injured or killed in a collision with a vehicle.

Three cameras have been installed on the property to document animals passing through. The information gathered will be used to plan a development project in collaboration with numerous partners.

The engagement and motivation of local residents played an important role in completing these acquisitions. “It is a real pleasure to work with a community that is so aware of its natural environment and engaged in its protection. NCC’s success in the area is largely due to the members of the Oliver Land Trust and the descendants of the Oliver-Walker family,” said Annie Ferland, NCC project manager.

The Oliver Land Trust foundation was established by Barbara Walker Oliver and William Oliver to protect the areas surrounding Lac Brûlé and its rich biodiversity for the long term.

The conservation of these properties was made possible through financial support from the Ensemble pour la nature project of the Quebec ministère de l’Environnement et de la Lutte contre les changements climatiques, the Government of Canada’s Natural Areas Conservation Program and Natural Heritage Conservation Program, Hydro-Québec, the Fondation de la faune Québec, and the MRC des Laurentides, through its Territorial Development Fund, as well as the U.S. Fish and Wildlife Service, through its North American Wetlands Conservation Act.