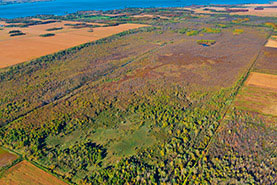 The Small and Large Tea Fields are among the last great peatlands of the Montérégie region.

Since 2007, thanks to widespread support from landowners and donors, the Nature Conservancy of Canada (NCC) has protected more than 900 hectares (2,224 acres) in this area. The acquisition of these properties means they can be protected for the long term.

In the 1800s, the Tea Fields covered more than 5,000 hectares (12,355 acres). Over the years, much of the area was turned into farmland, and today only 1,115 hectares (2,755 acres) remain. The Tea Fields are a last reminder of a landscape of vast peatland expanses that are now gone.

A peatland is a humid environment that is generally saturated with water and contains very few decomposing organisms. Vegetal matter accumulates much faster than it decomposes, resulting in the formation of a thick layer of peat.

These wetlands feature very particular ecological conditions. They are highly acidic, low in oxygen and poor in mineral nutrients. Only a few well-adapted plants can survive in such an environment. The pitcher plant, one of Quebec’s 15 carnivorous plants, is an example.

Although these environments have long been considered inhospitable places, we now know that they fulfill important ecological functions. Peatlands act like immense sponges, storing water during heavy rainfalls or when the snow melts. Moreover, they play a key role in purifying water by filtering pollutants and thus improving the water quality of watersheds.

To understand how peatlands evolved in southern Quebec, we have to look back 13,000 years ago at a time when the Champlain Sea covered the greater part of the Saint Lawrence river basin and the Great Lakes. The sea’s retreat triggered the gradual formation of peatlands in a series of depressions in the Saint Lawrence Lowlands.

Today, peatlands such as the Small and Large Tea Fields represent an incredible treasure trove for scientists. The pollen fragments they contain record the history of plant communities that existed in this area over the last 10,000 years.

Thanks to those plant fossils, researchers have reconstructed a history of the various periods leading to the current composition of the Tea Fields and of the region’s forest ecosystems. In addition to their unique contributions to the region’s biodiversity, the Tea Fields are a true natural laboratory!