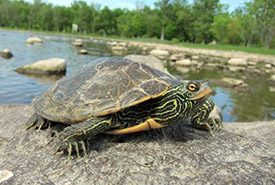 A resilient species in a highly urbanized environment

It is easy to forget that the Montreal area, although highly urbanized, is also an archipelago made up of a hundred or so islands and islets, as well as several waterways. In this aquatic environment, right in the heart of the greater metropolitan area, live numerous species, including map turtle, which is designated as vulnerable under Quebec’s Act Respecting Threatened or Vulnerable Species.

With funding from the Community Interaction Program, the Fondation de la faune du Québec, the Ministère de l'Environnement et de la Lutte contre les Changements climatiques and the U.S. Fish and Wildlife Service, and with the collaboration of the Quebec Turtles Recovery Team, the Nature Conservancy of Canada (NCC) is currently conducting a project in the greater metropolitan area aimed at the map turtle’s recovery.

Are you the owner of land with a shoreline and you would like to help protect turtles? Let yourself be inspired by these two waterfront property owners who shared their experiences with NCC:

The map turtle can be distinguished from other turtle species found in Quebec by the concentric yellow patterns on its shell. These patterns, similar to the contour lines used on geographical maps, are what give this species its name. The carapace (hard, upper shell) of the female can reach more than 27 centimetres, while that of the male rarely exceeds 16 centimetres.

The map turtle lives in the most populated and industrialized areas of Quebec and Ontario where it frequents large bodies of water, such as the St. Lawrence River, and certain lakes and rivers, such as the Lake of Two Mountains. Since it is very elusive and dives into the water as soon as it is approached, this species often goes unnoticed, and many people do not even know it exists.

Although turtle populations can be abundant in certain places that are particularly favourable, map turtles, like all the freshwater turtles found in Quebec, are at risk.

While the adult turtles’ shell provides very effective protection against predators, it is of no use against habitat degradation. The loss of egg-laying and sun-basking sites, which are critical habitats for the turtles' survival, are the main threat this species faces.

They also suffer injuries, sometimes fatal, from boat propellers or collisions with cars. It is also suspected that populations of turtle nest predators (raccoon, skunk, fox, etc.), which are artificially elevated in urban and suburban environments, limit turtle reproduction and threaten the long-term survival of populations.

The disappearance of the map turtle and its habitat could have unpredictable consequences on the food web of species that inhabit the same environment. The protection of map turtle habitat also directly contributes to conserving natural shoreline areas, maintaining water quality and reducing the chance of flooding.

Actions carried out by NCC within the framework of the project cover five areas:

How to help map turtles

NCC would like to thank its project partners, including the Groupe de mise en œuvre du rétablissement de la tortue géographique, the Ecomuseum, the City of Montreal, Nature-Action Québec, Éco-Nature and the St. Lawrence Action Plan (Community Interaction Program). Any citizens, private landowners, municipal employees/elected officials or organizations interested in the project are invited to contact Annie Ferland, project manager, at annie.ferland@conservationdelanature.ca. Together, let's look after this fascinating species for future generations.