The star of the wetlands expands its kingdom in the Outaouais 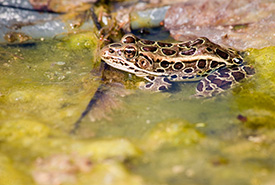 Frogs may not turn into princes when kissed, but they are nonetheless a sign of incredible wealth. We're not talking about gold and silver here, but rather ecological wealth: their presence in large numbers is a sign that a forest, marsh or river is doing well. In other words, finding frogs in nature is like finding gems in a beautiful palace!

Because amphibians breathe and drink through their skin, they are greatly affected by pollution and cannot thrive in an unhealthy environment. In addition, they feed on insects and, while we rarely enjoy insects when they’re swarming around us, their diversity is also a sign of a well-balanced ecosystem. Frogs, toads and tree frogs, also known as anurans, are also a source of food for a large number of animals. In other words, they play many roles in the environment.

The Nature Conservancy of Canada (NCC) has been fortunate enough to acquire nearly 200 hectares of important bear habitat in the Cantley and Val-de-Monts regions of the Outaouais. Thanks to the generosity of Pierre Boucher and an anonymous donor, who each donated a portion of their property, it will be possible for these forest and wetland areas to remain the natural havens they are for many species. Several birds benefit from this area, including Canada warbler and olive-sided flycatcher, which are both at-risk species in Canada.

Protecting the wetland habitat of amphibians benefits other species, but with their melodious love songs, anurans will always be the stars of their domain. After all, if their home becomes inadequate, they may desert it for another wetland paradise. Here’s hoping that NCC's lands will be suitable for these precious little frogs for a long time to come!

Thank you to our donors

NCC would like to thank all of our valued donors and partners who have made this project possible. Every gesture of support and every dollar is vital to the success of our mission.