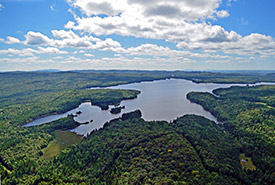 Through hard work and determination, the Nature Conservancy of Canada (NCC) has achieved remarkable results in the White Mountains. Thanks to the generous donations of landowners who care about conservation, NCC has now protected more than 9,000 hectares (22,240 acres) here.

Part of the Northern Appalachian Acadian ecoregion, and bordered to the east by the United States, the White Mountains territory is renowned for its mountains. This zone features an observatory, as well as a vast network of large forest tracts, rivers and lakes that are home to remarkable flora and fauna. Among the 500 animal species found here, four appear on the Species at RiskalList, including Bicknell’s thrush — one of the most threatened species of nesting birds in eastern North America.

Three areas have been protected here, including the Mount Hereford property. Forêt Hereford Inc. manages 5,062 hectares (12,500 acres) that are also protected under a conservation agreement on behalf of NCC. The nature reserve designation has been attributed to NCC’s other 200 hectares (590 acres). The conservation of this beautiful property was made possible by the generous gift of land by Neil and Louise Tillotson. This property is managed as a community forest by Forêt Herford Inc.

The Portage Lake property (3,000 hectares/7,413 acres), NCC’s first project in the Beauce, is adjacent to a protected area in the United States. Portage Lake is the largest lake in the Beauce, and the only one of its size in southern Quebec to be exempt from residential construction, aside from the four chalets of an outfitting operation. The gift of a large part of the owner’s possessions was a significant gesture for the conservation of the White Mountains. 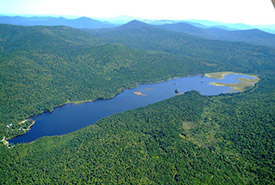 As for Lake Arnold (over 1,000 hectares/2,470 acres), the ecological diversity and rare species found there are now protected for the long term, thanks to the support of the Lake Arnold Preserve and of René Hétu.

NCC’s conservation efforts in the White Mountains are ensuring the ecological integrity of the forest habitat, which provides vast corridors for wide-ranging mammals. It also an important natural area for the species at risk that live there.