Many people may feel a bit like turtles this spring — eager to soon safely emerge from our shells and get back to enjoying the world. For humans, this might mean masking up and swapping sweatpants for going-out clothes. For turtles, it means braving busy roads to find mates and get to their nesting grounds.

As we all emerge from our dens and hit the road on new adventures, wildlife sightings — and collisions with vehicles — are more likely to involve turtles. The Nature Conservancy of Canada (NCC) is asking motorists to give turtles a break by keeping a keen eye out for the threatened creatures who may be basking on the pavement or simply trying to cross the road.

Spring is an active period for turtles that are setting off from their usual habitats to find mates and nesting sites. The many at-risk species of turtles in Canada, like other reptiles, are cold-blooded, so basking on gravel, sandy roadsides or warm asphalt feels good on cool spring days. And while a turtle’s shell can protect it from predators, it’s no match for a car. Every turtle lost in a vehicle collision has a significant domino effect for its entire species.

Turtles can take up to 25 years before reproducing, and their egg survival rate is very low. Approximately only two eggs out of 100 become adult turtles. A loss of one adult turtle is the loss of 20 years of development. To maintain their numbers within a population, turtles count on the survival of the adults, especially the females. Studies show that just a five per cent increase in annual mortality can put an entire population at risk of decline. 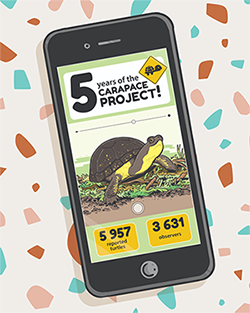 NCC encourages people to report turtle sightings and upload photos on carapace.ca, which helps informe where conservation efforts should be directed. To date, the website has received nearly 6,000 documented sightings of turtles. More than 20 Quebec roads and highways have been identified as hot spots for turtle-vehicle collisions, including a strech of road in the Outaouais region where new turtle fencing will be added this summer to guide turtles to a culvert that they can use to safely cross the road. More than 3,600 people have submitted on carapace.ca.

NCC would like to thank the financial partners who have contributed to the creation of the carapace platform:

The Nature Conservancy of Canada (NCC) is the nation's leading not-for-profit, private land conservation organization, working to protect our most important natural areas and the species they sustain. Since 1962, NCC and its partners have helped to protect 14 million hectares (35 million acres), coast to coast to coast, including 48,000 hectares (close to 119,00 acres) in Quebec.