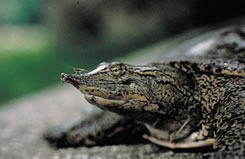 The Nature Conservancy of Canada (NCC) today announced the acquisition of two properties along the Rivière aux Brochets in Pike River, Montérégie. These properties feature habitats essential to spiny softshell turtle. The species is designated endangered under Canada’s Species at Risk Act (SARA) and threatened under the Quebec Act Respecting Threatened or Vulnerable Species (ARTVS). In Quebec, this turtle is now found only in the Lake Champlain area.

The Rivière aux Brochets properties are located in an agricultural area 70 kilometres southeast of Montreal, near one of the few known spiny softshell turtle egg-laying sites. Telemetric monitoring conducted by the Zoo de Granby, NCC's partner in this project, has shown that newborns of the species use this area.

Covering an area of just under two hectares (five acres), these habitats are nevertheless of great value. “Even though this site is small, it is very important for the survival of fragile species, such as the spiny softshell turtle,” says Valérie René, project coordinator at NCC.” Rapid shoreline modification is one of the factors threatening its survival, and the shorelines on these two properties are among the few remaining natural banks on the Rivière aux Brochets.”

These acquisitions were made possible thanks to the Gasser family, a family of dairy producers, and Jean Lapierre. Wanting these natural habitats to be conserved for the long term, they chose to sell their land to NCC.

The Rivière aux Brochets properties were not cultivated. The environment, which has returned to a natural state over the years, is of great importance to the neighbouring communities, since it plays a major role in maintaining water quality. Natural shorelines filter runoff water, creating a buffer zone between streams and developed areas.

This project was made possible by financial contributions from several partners:

“I would like to congratulate the Nature Conservancy of Canada for conserving property along the Rivière aux Brochets, protecting important habitat for species at risk, such as the spiny softshell turtle. We are proud to support this project in Brome-Missisquoi through the Canada Nature Fund’s Natural Heritage Conservation Program. By partnering with organizations like the NCC, we are making progress toward achieving our goal of conserving a quarter of Canada’s land and oceans by 2025.” – Lyne Bessette, Member of Parliament for Brome-Missisquoi

“We are pleased to continue our collaboration with the Nature Conservancy of Canada (NCC) on the Projet de partenariat pour les milieux naturels [environmental partnership project], a follow-up to the Ensemble pour la nature project that ended on March 31, 2020. In addition to enabling consolidation of the network of protected areas on private land through the securement and protection of natural environments, the grant awarded by the Government of Quebec will support projects for the acquisition of scientific knowledge and awareness, with a view to the additional protection of territories. Congratulations to NCC and its partners for this initiative, which will make a difference in conserving the habitats of several at-risk species, such as the spiny softshell turtle.” – Benoit Charette, Minister of the Environment and the Fight against Climate Change

“By protecting the spiny softshell turtle and its habitat, we are helping to preserve dozens of other plant and animal species that share the same natural environment. In this way, we are contributing to the preservation of biodiversity in southern Quebec.” –Patrick Paré, Director – Conservation and Research, Zoo de Granby

The Nature Conservancy of Canada (NCC) is Canada’s leading not-for-profit private land conservation organization, working to protect our most important natural areas and the species they sustain. Since 1962, NCC has helped to protect 14 million hectares (35 million acres), coast to coast to coast, including 48,000 hectares (close to 119,00 acres) in Quebec.

The Government of Canada's Natural Heritage Conservation Program (NHCP) is a unique public-private partnership designed to support the creation of new protected and conserved areas by securing private lands and private interests in lands. The program is administered by the Nature Conservancy of Canada (NCC). The federal government's investment in the program is leveraged by matching contributions raised by NCC and its partners, Ducks Unlimited Canada and Canada's conservation community. The NHCP replaces the Natural Areas Conservation Program, which expired on March 31, 2019.

The Projet de partenariat pour les milieux naturels (PPMN) is a four-year grant of more than $53 million from the Ministère de l'Environnement et de la Lutte contre les changements climatiques to NCC. It provides support for voluntary conservation initiatives to ensure the protection of natural areas of interest by establishing financial partnerships with conservation organizations in the province. The PPMN thus aims to develop and consolidate Québec's network of protected areas located on private land. It follows the Ensemble pour la nature project, which ended on March 31, 2020, and had similar objectives.

The North American Wetlands Conservation Act program is administered by the U.S. Fish and Wildlife Service.

The Zoo de Granby is a recognized conservation institution whose mandate is to ensure the well-being of the animals under its care, the reproduction of threatened species and the protection of animal species and wildlife habitats. A percentage of expenditures is allocated to conservation and research projects in Quebec and abroad. The Rivière aux Brochets properties were acquired as part of a five-year agreement between the Zoo de Granby and NCC. The aim of this partnership is to protect the habitat of at-risk species in different regions of Quebec. Visit the Zoo's website at zoodegranby.com.

To watch the recording