Ecological corridors; a safeguard for wildlife 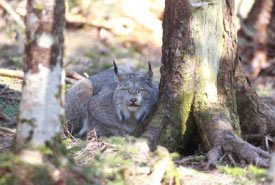 In order to survive, all animals, but especially large mammals, need to move to habitats where they can reproduce, feed and find shelter. Vanishing forests and landscape fragmentation is a direct threat to their survival unless we protect the passages, called ecological corridors, which connect natural areas together.

As part of the Ecological corridors: a climate change adaptation strategy project, the Nature Conservancy of Canada (NCC), along with five other conservation organizations and more than 40 partners, is working to help maintain connectivity corridors between protected areas in southern Quebec.

Land borders are not barriers for animals, which is why NCC is also working with American partners to ensure the success of connectivity initiatives across North America.

Lynx: a feline on the hot seat

The conservation of these corridors is essential for the movement of lynx and other animals to ensure their survival. For example, lynx must have many habitat areas measuring at least 70 square kilometres each to ensure its needs are met.

Lynx requires a large home range, and its survival depends, in part, on maintaining these connectivity zones. The home range, which represents non-fragmented wooded areas or areas connected by corridors, are essential to a species’ life cycle and activities (reproduction, food, shelter, etc.).

The lynx is an elusive species, and not easy to see. Yet they are present in our forests, particularly in the southeast of the province, after almost becoming extinct in the 1980s due to intensive hunting. The situation had become so critical that the government at the time banned lynx trapping for more than 20 years.

Today, the species seems to be doing well in Quebec, but its survival remains precarious in the Maritime provinces due in part to the loss of its habitat. Indeed, human activities, roads, farms and cities can divide territories and, by the same token, habitats, which results in species isolation.

Other animals such as moose, wolf and bear, emblematic species of Canada’s great outdoors, are also affected. Quebec is known for its rich natural areas and wildlife. We are working to conserve this wealth of species’ habitat now.

Taking action in the context of climate change

With the effects of climate change, it is estimated that species’ habitat in Quebec will shift northward about 45 kilometres per decade. The province could become a climate refuge for several mammals, and, as a result, is likely to play a key role in climate change adaptation on a continental scale.

To counter this threat, it is vital to consolidate and restore connectivity areas now. This includes:

The Ecological corridors: a climate change adaptation strategy project is funded by the Fonds vert, as part of Action-Climat Québec, a program of the Ministère de l’Environnement et de la Lutte contre les changements climatiques stemming from the 2013–2020 Climate Change Action Plan. The Fondation de la faune du Québec, the ECHO Foundation and the Woodcock Foundation are also financial partners in this project.