Nesting boxes: Encouraging the return of a threatened species 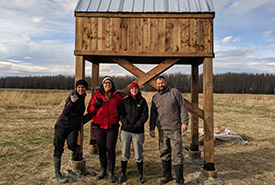 The team at île du Moine, Quebec (Photo by NCC)

Summer wouldn’t be the same without the twittering and warbling of barn swallows. Although barn swallows are one of the most widespread species in the world, they have been considered threatened in Canada since 2011. Barn swallow populations began to decline in the 1980s, partly due to changes to the open, rural landscapes that the birds frequent. The Nature Conservancy of Canada (NCC) is currently working on reintroducing the species by building and erecting nesting boxes on its île du Moine property in Sainte-Anne-de-Sorel, on Lac Saint-Pierre. 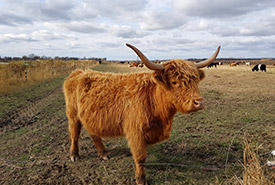 Île du Moine, an area of over 500 hectares (1,236 acres), of which 160 (395) are used for pasture, was once home to some 30 species of rural birds. However, when cattle were removed from the island a few years ago, these birds became much rarer, as the cows attract insects on which rural birds feed. The Retour au pâturage à l’île du Moine project, led by NCC in partnership with the Commune de l’île du Moine, is aimed at encouraging the return of these birds, particularly barn swallows. To do this, NCC and our partners started off by restoring the island’s historic grasslands and then reintroducing cows. 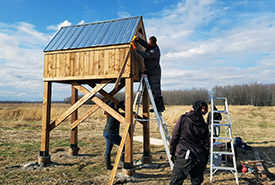 Although barn swallows have regained access to a major food source, the project is far from over! To ensure the species’ long-term return, we have to make sure the birds have access to suitable spaces to build their nests. This past November, members of the Commune de l’île du Moine, along with an NCC employee and three Conservation Volunteers, set up a nesting structure on the western end of the island. The Commune de l’île du Moine, made up of local famers and Sainte-Anne-de-Sorel residents, had already designed the different components of the nesting structure, which the team then assembled. As barn swallows like to build nests in structures around farms, like barns, bridges and sheds, this new nesting structure is a perfect spot for them to set up house.

NCC and our partners will be monitoring occupancy rates in the structure over the next few months. In addition to barn swallows, several other species will benefit from this eight-box nesting structure. It even has an opening for bats! 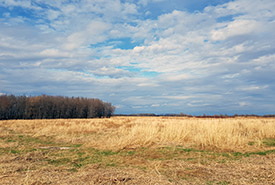 NCC would especially like to thank Natasha Doutre, member of the Commune de l’île du Moine, for designing the nesting structure (based on plans provided by the Regroupement QuébecOiseaux) and for guiding participants through the assembly process. NCC would also like to thank the other members of the Commune who lent a hand, as well as volunteers.

This activity would not have been possible without the financial assistance of the Fondation de la faune du Québec as part of the Mise en valeur de la biodiversité en milieu agricole program, and of the Ministère de l’Environnement et de la Lutte contre les changements climatiques and Environment and Climate Change Canada, through the Community Interaction Program (part of the St. Lawrence Action Plan).

To help bring back the barn swallows, donate to NCC here!