Planting for the monarch’s future, one flower at a time 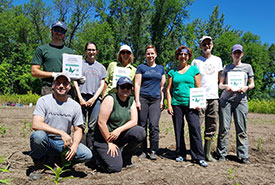 This fall, monarchs, an emblematic insect of North American, will begin their journey to Mexico, one of the most important migratory phenomena in the animal kingdom.

For several years now, monarchs have struggled to make this voyage. Climate change and the disappearance of plants that support the survival of the species are making its survival difficult. The increasing distances between the islands of flowers where monarchs can land, feed and reproduce, and the increasing frequency of storms caused by climate change, have helped to decimate some 800 million monarchs since the 1990s. There are only 200 million left. 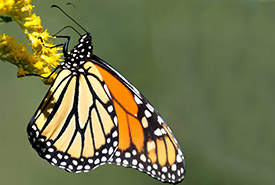 The monarch's migratory journey can reach up to 5,000 kilometres and last up to two months. Butterflies born at the beginning of summer live for 4 to 6 weeks, while those born at the end of summer, the ones who undertake the long journey, live between 6 and 7 months. (Photo by Alexis Delray)

To fight this decline, the Canadian organization Earth Rangers has launched the project Bring Back the Wild – The Monarch Butterfly, which aims to restore this insect’s habitats. The Nature Conservancy of Canada (NCC), which owns lands that the monarchs cross during their migration, has partnered with Earth Rangers on this project. NCC, with the support of Earth Rangers, has begun planting flowers on one of its properties on île Bouchard. 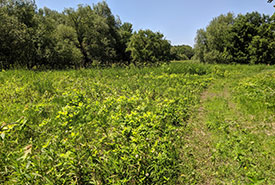 Île Bouchard, which is part of the territory of Saint-Sulpice, east of Montreal, has several meadows, an environment that monarchs like to visit. Last July, volunteers accompanied NCC interns to plant milkweed, as well as other native flowers suitable for the species. The milkweed is vital to monarch's survival, because it is the only plant that the monarch's caterpillar feeds on.

The team, composed of seven volunteers and three NCC interns, enjoyed a sunny morning. They planted 1,035 plants on île Bouchard that will benefit monarchs and other insect species.

“Our motivation and determination have enabled us to plant more than a thousand young plants, whose colourful flowers will attract the butterflies during their migration,” explained Raphaëlle, one of the volunteers at this event. As the flowers that were planted flower from June to October depending on the species, the butterflies will benefit from a long flowering period.

“This action is part of a major movement to re-establish this species, and I’m proud to have been able to contribute to it,” Raphaëlle said.

We would like to express warm thanks to M. Beauregard, a farmer on a property adjacent to the NCC land, who generously cleared and ploughed the planting site. He also provided a boat for a preliminary visit to île Bouchard.

This activity would not have been possible without the contribution of Earth Rangers, a registered charity dedicated to educating children and their families about biodiversity, inspiring them to adopt sustainable behaviours, and empowering them to become directly involved in protecting animals and their habitats.

NCC was also able to count on the collaboration of Quebec's ministère de l’Environnement et de la Lutte contre les changements climatiques (MELCC) through the Ensemble pour la nature project. The Ensemble pour la nature project is a three-year, $15-million grant to NCC from MELCC. It aims to establish financial partnerships and acquire scientific knowledge to ensure the conservation and protection of natural environments on private lands in Quebec between now and March 31, 2020. It thus promotes solidarity with respect to protected areas by involving Quebec communities in conservation actions.

Are you interested in getting involved with NCC? Visit conservationvolunteers.ca for a schedule of upcoming events!