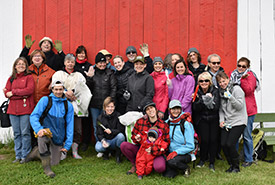 River and stream debris is a growing threat to a wide variety of marine animals and fish. Plastic and Styrofoam pieces are particularly dangerous. Despite their small size, they are the most harmful waste to aquatic life, as they decompose very slowly, can be confused with food, and can trap or be ingested by marine animals.

Shoreline cleanup initiatives are increasingly popular solutions to improving the quality of water and riparian environments. 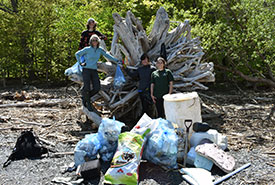 The volunteer cleanup of the banks of Anse de Bellechasse in Saint-Vallier was carried out thanks to the efforts of a group of employees at the Caisse Desjardins de Lévis, members of the Corporation du Domaine de Pointe de Saint-Vallier, NCC and other volunteers who care about the site.

The volunteers walked the shores of the cove, carrying collection equipment provided by CmonBag. The objective was to reduce the amount of waste that is carried onto the banks and into the undergrowth each spring by ice and tides. Volunteers found many washed-up objects in addition to plastics, such as tires and propane tanks.

The highly motivated volunteers took this chore to heart and were amazed at the amount of waste they were able to find. The activity began with a presentation on the reasons why the river carries waste to the banks. Then, the president of CmonBag, an organization working on shoreline cleanup around the world, shared her expertise with volunteers, particularly on the importance of their participation in this collection, as they are joining forces to meet a global challenge. The volunteers helped fill several dozen bags. The collected waste was sent to the Saint-Vallier waste collection centre.

We would like to thank everyone involved in this important citizen action for the health of the St. Lawrence River.