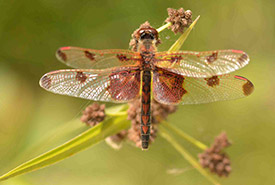 The Nature Conservancy of Canada (NCC) is currently conducting an inventory of flora and fauna and their habitats in Kenauk, to document the rich biodiversity of this landmark area. Located in the Outaouais region, this exceptional territory extends over close to 16 kilometres from west to east and nearly 21 kilometres from south to north. NCC is thankful for the generous support of local botanists, zoologists and ecologists who carry out this important work!

This summer, volunteers from the Ottawa Field-Naturalists’ Club (OFNC) and Bird Protection Quebec (BPQ) roamed the area to collect valuable observations on the animals, plants and habitats on the Kenauk property.

In July, OFNC volunteers conducted a bioblitz — an intensive inventory over a very short period of time. They observed several species, such as four-toed salamander, ring-necked snake, northern flying squirrel, various species of fungi and a multitude of moths.

NCC would like to thank all of the volunteers who participated.

These activities were made possible through the financial support of Environment and Climate Change Canada.

Find out more about the inventories conducted on Kenauk.