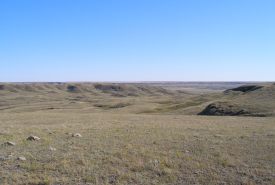 Located in southwestern Saskatchewan, the Frenchman River is a corridor of critical wildlife habitat. It is located on the southern edge of the famous Palliser Triangle, the driest region of the Canadian prairies.

The Frenchman River is part of the fragmented Mixed Grassland Ecoregion. Less than one per cent of the ecoregion is made up of tracts of natural habitat that are large enough to support a diversity of native species.

Species at risk around the Frenchman River include black-tailed prairie dog, greater sage-grouse and swift fox.

Southwestern Saskatchewan’s native prairie is threatened mostly by its conversion to cropland, fragmentation, degradation and wetland drainage. Riparian and grassland habitats are home to prairie wildlife and migratory birds. To restore wildlife corridors here, some of the marginal croplands must be reverted to perennial forages.

Conservation groups and ranchers concerned about the long-term conservation of critical habitat are working together to secure critical areas and help sustain natural habitat here.