www.natureconservancy.ca > Home > Where We Work > Saskatchewan > Our Donors 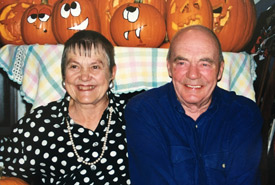 Growing up on the prairies in Manitoba and often visiting a relative’s farm, Gladys Murphy developed a passion for nature. One of her favourite birds is the stunning red-headed woodpecker, as they are fun to watch and were always around when she was growing up. Her love for birds continues and she recently built bluebird nest boxes and is excited to see tons of bluebirds every summer.

Gladys met her husband, Fergus, at the University of Manitoba College of Medicine. After graduating, he moved to practise medicine in Humboldt, Saskatchewan. When he was offered the job, he asked if they would have a position for his fiancé, Gladys, as she would finish her schooling in a year. Gladys then joined Fergus in Humboldt to practise medicine too. In 1960, they moved and purchased a beautiful piece of land near Saskatoon.

Gladys reached out to the Nature Conservancy of Canada (NCC) because she wanted to conserve their piece of land — known as Strawberry Hills — for the long term with a conservation agreement. A conservation agreement is a contract between a landowner and conservation organization — in this case NCC. The landowner agrees to limit some uses of the piece of land to protect its natural features and the species that live there. In return, the landowner is paid for placing the agreement on their land. NCC monitors the land to ensure the agreement is respected.

The main benefit of a conservation agreement with NCC, Gladys felt, is that she and her family can continue to own and use their land. They love to hike and go bike riding among the grasslands. “It’s sad to see natural spaces lost to development,” she says. “I think it is important to look after our natural areas that benefit us, and the plants and animals too.”

Gladys’s Strawberry Hills property is located near the eastern limits of Saskatoon. The property consists of 85 hectares (210 acres) of native grasslands, woodlands and wetlands. The diverse habitats on the property feature a variety of mammals and grassland birds. Many species at risk can also be found in the area, including Crawe’s sedge, five-foliated cinquefoil, northern leopard frog, Sprague’s pipit and loggerhead shrike. Thanks to Gladys and NCC, this area will be conserved for the long term. To learn more about protecting grasslands, visit conservegrasslands.ca.