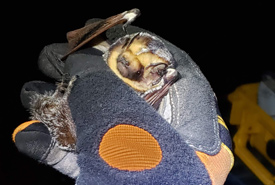 The little brown and northern myotis are both listed as endangered in Canada due to devastating population declines in eastern Canada as a result of white-nose syndrome. White-nose syndrome is a fungal disease originally from Eurasia that infects hibernating bats, causing them to wake up more frequently and subsequently burn more of their energy reserves than they can afford. White-nose syndrome has caused a greater than 90 per cent decline in known populations of hibernating myotis bats in Nova Scotia, New Brunswick, Quebec and Ontario.

The fungus is moving west, and has recently been documented in Saskatchewan. As a result, there is an urgent need to determine the population status of myotis bats in Saskatchewan, as well as determine what type of habitats they are using for different parts of their life cycle.

The Nature Conservancy of Canada's (NCC's) Saskatchewan Region has been working to create an inventory of the bat species present on NCC properties through acoustic surveys. Acoustic surveys involve using an ultrasonic recording device in areas likely to be used by bats (such as waterbodies and forest trails) and passively recording the echolocation calls of bats as they fly around and forage for insects. Echolocation calls of each species are unique, and by reviewing sonograms of the bats calls recorded on each property, we can determine which species are present as well as the levels of activity of each species. To date, we have surveyed 15 different properties across the province and documented all eight bat species known to occur in Saskatchewan, including endangered little brown and northern myotis. 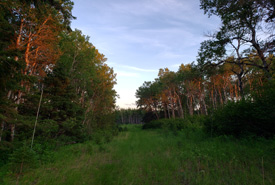 In summer 2018, we initiated a project to identify and characterize habitat use by little brown and northern myotis in the aspen and mixed-wood forests of central Saskatchewan. Occurrence of both species has been confirmed in the area through acoustic surveys; however, which areas and habitat types they are actually using and for what purpose (such as day roosting, maternity colony) remains unclear. The project involves capturing bats with mist nets and attaching radio transmitters to the two myotis species. Bats with transmitters are tracked back to their roost sites, which can then be quantified.

Both little brown and northern myotis use tree cavities for roost sites, so the roost trees being used can be compared to other random trees on the landscape to identify characteristics important for selection and use by myotis bats. By understanding what habitat is being used and the extent of that use, we can tailor management in the areas where these species occur to benefit the species and aid in their protection and recovery.

As of fall 2021, we have successfully completed two seasons of mist netting at two different NCC properties and captured 19 bats of three different species — hoary bat, silver-haired bat and big brown bat. We have also completed over 100 random vegetation survey points on each property, which will characterize the forest structure and tree diversity and allow us to compare the habitat used by bats to what is available on the landscape. We also completed vegetation surveys on each identified roost tree for all captured bats. Since we have yet to capture any myotis bats, we will be expanding the project to look at the habitat use of other bat species as well. We will have one final season of mist netting in summer of 2022. 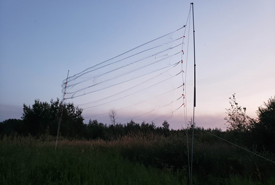 You can also help with the protection of bats by joining the Bat Watch Program (check out batwatch.ca for more details), which aims to document and monitor bat colonies across Canada. The data collected through Bat Watch allows scientists to track bat populations and distribution, as well as determine if the populations are stable or growing, or if they are in need of conservation action. Participation is as easy as inputting locations of known bat roosts and colonies to the website; if you have a bat house, barn or attic that has bats in it, you’re a perfect candidate! If you want to do a little more, you can count the bats in the colony or roost site and enter that information as well. This is done by simply standing below the roost site around dusk and counting the bats as they emerge. Every contribution is important, as data on bat populations and distribution is lacking in many parts of Canada.