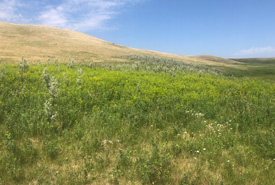 Leafy spurge is a problematic invasive plant species that has spread over more than 8,000 hectares (more than 20,000 acres) in Saskatchewan. Known for its distinct yellow and green flowers, this weed can quickly overtake native plant species as well as water and nutrient resources. Leafy spurge sap is also an irritant to both humans and animals and can cause blistering and rashes when in contact with skin.

The Nature Conservancy of Canada (NCC) is actively preventing the spread of leafy spurge through the use of flea beetles. These beetles only eat leafy spurge, and their larvae play an important role in helping control weed growth. The larvae damage the roots through feeding, and the feeding wounds provide an entry for various disease-causing organisms. This causes the plant's nutrient reserves to become depleted and the plant will eventually die. Beetles are an alternative to chemical spraying and will not cause harm to native plants. 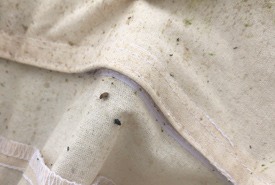 This summer, a group of five NCC stewardship staff collected two species of flea beetles from the Besant campground, near Moose Jaw, using large sweep nets. After three hours of gathering, 13,500 beetles were captured from the site to be used on two NCC properties; 9,500 beetles were transferred to Big Valley, while the remaining 4,000 were released at Wideview. 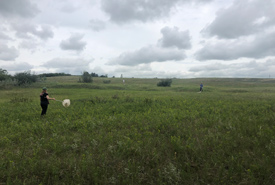 Transferred in paper bag containers to their new homes, these beetles are very small insects; the average size is two millimetres long. They jump around in their bags like popcorn being popped, taking their time to disperse among the spurge once they are released. Patience is a virtue when monitoring the overall effect of the beetles on leafy spurge, as it can take a few years before a noticeable change in patches is spotted. 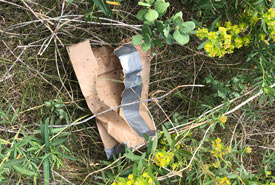 The rehoming of spurge beetles to leafy spurge patches is a great alternative to spraying in sensitive areas, such as near water. The beetles alone will work to help reduce the spread of the plant, but it will take a long time to see noticeable results. NCC staff are using the beetles in combination with spraying in some areas, in hopes of achieving better results in a faster time frame. These are just some of the many ways that our field teams work to track and restrict the growth of invasive plant species.