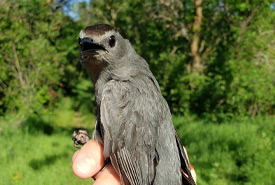 We concluded our third MAPS (Monitoring Avian Productivity and Survivorship) season at Big Valley, capturing 166 birds of 20 different species over six sessions. This year (2020) proved more successful than last year, as we captured nine more birds than in 2019. Of the birds captured this year, 119 were newly banded and 44 were recaptured birds that already had a band.

The MAPS program monitors bird demographics and contributes to bird conservation across North America. A standardized system of fine mesh nets is used to capture birds during the summer nesting season. MAPS operators band the birds, collecting data on their age, sex, body condition and reproductive status. The captured birds are given a lightweight, uniquely numbered aluminum leg band and released unharmed.

There were many highlights from the 2020 season, including a streak of near-perfect weather for each day, allowing us to run each of the six sessions successfully!

We recaptured a male yellow warbler that we initially banded as an “after second year” bird in 2018, meaning that he is at least four years old and a gray catbird that we initially banded in 2018 as a “second year bird,” making it three years old. Considering the perilous lives these birds live, including long migrations, this is truly an amazing feat! In contrast to these veterans, we captured multiple baby or “hatch year” birds in the later sessions, including seven black-capped chickadees, one warbling vireo, one house wren and one yellow warbler. Juvenile yellow warblers can be identified by a pinkish bill and gray feathers on their bellies; gray juvenile plumage provides better camouflage while they’re in the nest. 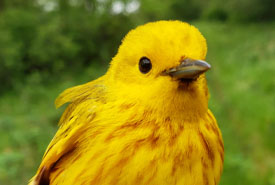 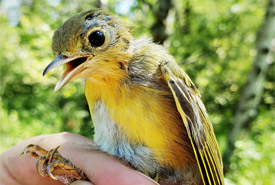 Another highlight was capturing a male Cooper’s hawk on our fourth session. We were unable to band the hawk because they require larger bands than those stocked at the Big Valley station, but we were still able to gather other useful data. 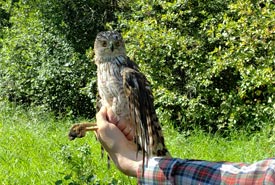 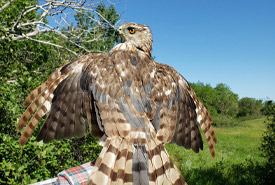 Data from this season will enable Saskatchewan conservationists to learn the health of local bird populations and will also be used to inform NCC’s management of the Big Valley property. In addition, since MAPS is a continent-wide program, data collected at Big Valley will also contribute to conservation of birds across North America. We are already looking forward to going back out in 2021 for another successful MAPS season!