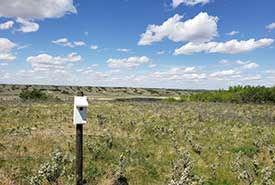 Across Canada over the summer, you may have caught a glimpse of one of these shimmering blue and white insect-eating birds as they zoom by near open fields or open water. Tree swallows glide more in their flight than other swallow species, giving their flight a graceful appearance even when they are in active pursuit of a meal. You may even have seen their heads poke out of nest boxes. They are highly social and often live close together.

According to data from the North American Breeding Bird Survey, the continental tree swallow population declined by a staggering 49 per cent between 1966 and 2014. This is in line with the general decline of aerial insectivores in Canada over a similar timeframe — 59 per cent between 1970 and 2016 according to The State of Canada’s Birds 2019 report.

Factors contributing to this decline include: 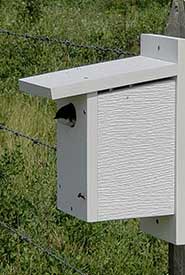 An adult tree swallow peeking out of a nest box at Fairy Hill property, SK (Photo by NCC)

Tree swallows can live and nest in tree cavities or human-made nest boxes, including some of the ones that the Nature Conservancy of Canada (NCC) volunteers installed at Fairy Hill, Saskatchewan in 2019. Fairy Hill is one of three sites for the Tree Swallow Project. The project aims to better understand how the species uses nest boxes. Another aim of the program is to understand the species’ reproductive success and nest survival (survival of the eggs and chicks) over the breeding season. 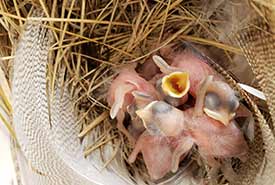 Researchers visit the nest boxes every four to five days (or more frequently closer to hatch day) to document which species use them and if young swallows successfully hatched. They also monitor whether the fledglings were depredated or if the nest was abandoned. By monitoring each active nest, researchers collect data on how many eggs were laid in each nest, when the eggs were laid, how many eggs successfully hatched and how many young survived. They also compare nest survival rates between the different sites of the project. This helps to provide an assessment of habitat quality.

NCC can use this information to manage properties to benefit tree swallows.

What we learned this year 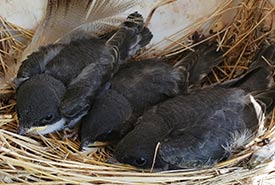 During the summer of 2020, 20 of 29 of the nest boxes at Fairy Hill were inhabited by tree swallows, with an apparent nest success of 70 per cent. In total, 58 fledglings were produced in the nest boxes at Fairy Hill. Predation was determined to be the primary cause of nest failure this year. To help improve nest survival, researchers plan to install predator guards (wooden squares that go around the entrance hole) and to investigate their effectiveness.

To learn more about the project and how you can help tree swallows, watch this short video, below: