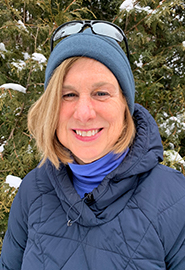 Kelly is the past co-chair of Dialogue NB, past president of the Moncton West Riverview Rotary Club, past vice-chair of the Transportation Association of Canada, a former director with the Fredericton YMCA and a volunteer with the Community Kitchen.

Kelly has participated in endurance sports for many years, completing several marathons, long-distance triathlons and long-distance open-water swims. She completed the BIG SWIM from New Brunswick to PEI, and is looking forward to swimming across Bras d’Or lake this summer to raise funds for Brigadoon Village. Kelly lives in Fredericton with her husband, Darren Craswell, and their cat, Frank.