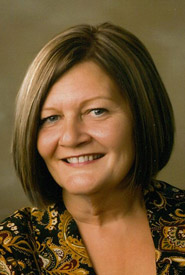 Linda Stephenson joined the Nature Conservancy of Canada (NCC) in 1998, with the mandate to establish the Atlantic Region. She worked with colleagues and volunteers to build a strong presence across the four Atlantic provinces, and considers “raising a work family” of exceptional calibre as one of her greatest accomplishments during this time. Mentoring young people, while also learning from them, is one of her greatest joys.

Linda considers the non-profit sector her "sweet spot" and has worked for NGOs since the mid-1980s. Her first exposure to the sector was with the Conservation Council of New Brunswick. Her career has included work with persons with disabilities at the Canadian Paraplegic Association and with youth at risk at Street Outreach Services and the Boys and Girls Clubs of New Brunswick. She has served on the Executive Committee of the Atlantic Canada Conservation Data Centre, the Board of Eastern Habitat Joint Venture, the South Central NB Forestry Working Group and a number of other organizations.

According to Linda, a rewarding career in conservation was inevitable, having been raised by parents who considered Rachel Carson’s Silent Spring necessary reading for their two daughters.