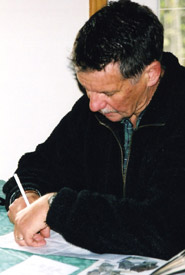 Michael Bradstreet developed a passion for conservation and wildlife biology at a young age.

He first visited Norfolk County, Ontario when he was 14 years old to volunteer with the Long Point Bird Observatory (LPBO). He was unaware then that he would return to Norfolk some years later to join the LPBO, now Birds  Canada (BC), as its president.

Prior to joining LPBO/BC, Michael worked for 14 years as a biologist for LGL Ltd. studying seabirds, fish, marine mammals and high Arctic ecosystems across Alaska, Canada and Greenland.

Michael has directed and conducted research on wildlife habitat and endangered species across Canada and has authored more than 20 articles in peer-reviewed literature. His fundraising efforts have contributed to many conservation successes, including the internationally recognized Birds Canada headquarters and the Backus Woods Trust Fund.

Michael joined the Nature Conservancy of Canada (NCC) in 2005 as the regional vice-president for Ontario, where he began work on the Norfolk Forests and Long Point Wetlands project.

In 2007, Michael became vice-president of conservation operations for NCC. He continued to raise funds and direct land securement and stewardship initiatives across Canada.

In 2016, Michael became the senior vice-president of new conservation strategies for NCC. He was responsible for sector-wide conservation initiatives, building networks for applied research, education and innovation in conservation, supporting community conservation programming, among many other responsibilities.

Michael retired from NCC in spring 2020. His contributions to Canadian conservation were recognized in December 2020, when he received the Order of Canada.