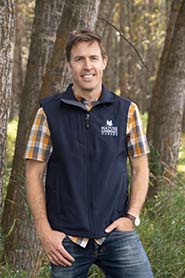 
Tom Lynch-Staunton joined the Nature Conservancy of Canada (NCC) in September 2020 as its regional vice-president in Alberta. Tom has held senior roles with the Canadian Cattlemen’s Association, and most recently, with Alberta Beef Producers as head of government relations and policy. He has been a mentor in the Cattlemen’s Young Leaders program and has sat on various councils and advisory boards, including the Edmonton Food Council and the Canadian Roundtable for Sustainable Beef There, he chaired the National Beef Sustainability Assessment and Science Advisory Committees.

“As someone who has both worked in and enjoy the outdoors, I have a strong passion for conservation and stewardship of our natural areas,” said Tom. “As a former rancher, I have a lot of pride in seeing a healthy and functioning ecosystem with abundant biodiversity as a result of the care of the land we provided. I hope to build upon the great work Bob has accomplished, and I am very excited to be once again working with a great team in conservation.”

Beyond collaborating with Alberta’s ranching community and levels of government, Tom has a passion for the outdoors. He shares NCC’s concern about the loss of native grasslands, which are among the world’s most endangered ecosystems. He relates to it on a personal level having co-managed a fourth-generation cattle operation in Alberta’s foothills.