www.natureconservancy.ca > Home > Who We Are > Publications > Magazine > Fall 2017 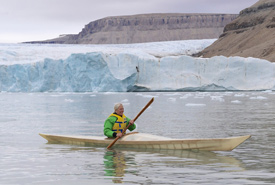 For the fall 2017 issue of the Nature Conservancy of Canada Magazine, freelance journalist and editor Brian Banks discussed the future of conservation with Catherine McKenna, Canada's Minister of Environment and Climate Change. Read their interview below:

Brian Banks (BB): How committed is Canada to hitting the Pathway to Target 1 goal by 2020?

Catherine McKenna (CM): We’re absolutely committed to meeting the target, and we’re working really hard [to get there]. We haven’t been in government that long, but we’ve already been working with the provinces and territories and bringing together the other unusual partners. It’s really hard to meet the targets, the goal, which is 17 per cent of terrestrial areas and 10 per cent of coastal marine areas.

We’re bringing together everyone, from Indigenous peoples, to ranchers, to not-for-profit organizations, to develop a path to get to this goal. We have a national advisory panel, and we have an Indigenous circle of experts that will help look at what are all the opportunities that are out there and how we can move forward on them.

John Lounds, president and CEO of the Nature Conservancy of Canada (NCC), is a member of our national advisory panel. So we have a great group that are looking at all the opportunities and looking outside the box, including Indigenous protected areas.

We’re all committed to meeting this target.

BB: What role can private land conservation play in these efforts?

CM: When you look at where we need to protect areas, it includes big spaces, often in the north, but also private lands, which are mostly found in the south of Canada, where we know that there are areas rich in biodiversity, but where there’s a lot of urban development. 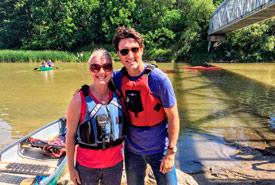 We need to be working together to protect those lands, and the Nature Conservancy of Canada, working with private landowners, plays a really important role.

[Private land conservation] helps to protect habitat for species at risk and migratory birds. It also is important to have corridors, or connections, between protected areas. In the context of climate change, we know that these protected areas play a really important role in fighting and mitigating the effects of these changes.

BB: You mentioned corridors and connections between protected areas. How important is it for private land conservation to connect its work to existing protected areas?

CM: [Connectivity is] a really key piece. Sometimes the lands that are acquired aren’t huge, but they connect broader swaths of land. Animals don’t just stop because it’s someone else’s land.

Figuring out how to connect these areas is really important, and the Nature Conservancy of Canada has been very effective at working with private landowners, including ranchers and farmers, to acquire these lands.

BB: This year NCC is celebrating the 10-year anniversary of the Natural Areas Conservation Program. What are some of the NACP’s key accomplishments?

CM: I believe that it’s important to have public-private sector partnerships, and that’s exactly what [the NACP] is. It takes real action to protect lands. And between 2007 and 2016, [the program helped conserve] 418,000 hectares of not just any lands, but ecologically sensitive lands. [We predict that] by 2019 it’s going to be well over 500,000 hectares.

It’s really about protecting lands that people care about. You’re connecting people to the land, you’re engaging people and getting them excited and motivated to do this and be part of a bigger picture.

It’s not just environmentalists. You have ranchers and farmers all coming together with the federal government and with provinces to protect really important pieces of land.

Canadians really understand that it’s critically important that we protect our natural beauty. That’s something that’s broadly shared by Canadians across the country, of different political persuasions. 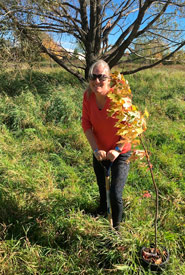 BB: When you’re doing things privately, are you also out in nature? Is that what you seek to do?

CM: I love nature. My husband is from Alberta, so I spend a lot of time out there, in parks and open spaces. We have a cabin in northern Manitoba, so we also spend time there. I’m from Ontario.

I try to get out in nature as much as I can. It’s a way of disconnecting from my job, but also a reminder about how important it is that we protect these places because we love them as Canadians.

It’s part of our identity as Canadians. But you need to be thoughtful to take actions to protect [these places].

I was just in the Arctic, [where we are] seeing big impacts from climate change. It’s even more important that we’re very thoughtful in protecting these areas. The Lancaster Sound announcement was a great [accomplishment]. It was a result of  partnership with a number of people, but including the Nature Conservancy of Canada, that worked with Shell, which relinquished some permits.

This is where I really love my job, because it allows me to see very tangibly why these areas matter, and also to bring together unusual suspects. I love it that everyone is part of this and everyone believes it’s really important.

BB: Just one further thought. It’s interesting how all these things connect. You mentioned Lancaster Sound, but we were also talking about some of the work in the more urbanized areas of the south. Just look at what’s happening south of the border, where there has been unprecedented flooding. One of the things you hear a lot about is the extent that wetlands have been paved over and how that increases the flooding. Which gets back to the importance of conservation related to the urban areas.

CM: You’re exactly right. Wetlands play an extraordinarily important role. I think we can look at natural ways to deal with the impact of climate change. We’re seeing storms that you’d see once every 100 years every five years or three years. So this is the future. If we can be thoughtful about using natural spaces, wetlands, as natural barriers, that could be extremely helpful. We’re looking at that in the context of our climate plan for green infrastructure funding: how you can also include green infrastructure, not just hard infrastructure, but also things like wetlands for exactly that reason.