www.natureconservancy.ca > Home > Who We Are > Publications > Magazine > Fall 2018 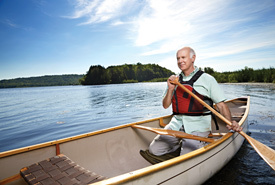 By Leslie Garrett, author and journalist

The Nature Conservancy of Canada invites you to join the Landmark Campaign to conserve more land faster, connect more Canadians to nature and inspire the next generation of conservation leaders.

On a small lake in Central Ontario on a summer day already eliciting heat alerts at 8 a.m., John Lounds lifts a canoe from the roof of his dark grey car and slips it into the water with the help of a friend. A family of mallards remains undistracted near the cattails. Lounds often turns to his canoe to escape the hustle and bustle of the city, and to reflect on his connections to nature.

I ask Lounds about more adventurous canoe trips, and his gaze fixes on something in the distance. His eyes light up as he recalls previous trips exploring Canada’s waterways. There was that backcountry canoe trip along the Ashuapmushuan River in Quebec, whose name in Innu means “place where one lies in wait for moose.” It was on a different trip, though, along the Missinaibi River in northern Ontario, where his group spotted two moose. And, he adds, his voice reverent, “Paddling into the wind with the sun behind us, we had the treat of getting very close to a wolf onshore.”

It’s clear that Canada’s wilderness means something to Lounds; something more than pretty scenery. “It’s who we are,” he says. “It’s woven into the fabric of our nation. Indigenous Peoples in Canada, who cared for this land long before European settlers arrived, are deeply connected to nature. They believe the natural world is sacred. We have much to learn.”

Lounds dips his paddle into the glassy water, and propels the canoe forward. When not navigating the water in a canoe, Lounds is at the helm of the Nature Conservancy of Canada (NCC), an organization that conserves what symbolizes Canada the world over: our natural places and wildlife. “We have the opportunity, perhaps more than any other nation on the planet, to make conservation count,” he reflects.

Although today’s paddle is a short one, there will be more adventurous canoe trips for Lounds. For now, looming large on his agenda is NCC’s most ambitious undertaking to date. Lounds and his colleagues are inviting Canadians to join the Landmark Campaign, with its goals to conserve more land faster, connect more Canadians to nature and inspire the next generation of conservation leaders. 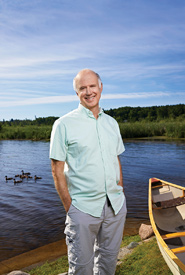 Lounds leads from the conviction that thinking big is the first step toward achieving big results. Ask him if he’s daunted by this latest shoot-for-the-moon campaign, and he responds with characteristically quiet conviction about what NCC can achieve, but only with the help of its supporters.

“It’s our supporters who encouraged us to set the most ambitious goals in our history. Their passion for nature — their belief in what we do — gives us confidence that we can reach those goals,” reflects Lounds.

He points to the over $540 million already raised since the start of the campaign. The Landmark Campaign will effectively double the amount of land protected in NCC’s 56-year history. And, he notes, urgency drives the mission. “Canada’s natural landscapes are still under threat from habitat loss and fragmentation, invasive species and, of course, climate change,” he says.

“We may never get a better chance to conserve our country’s natural legacy.” 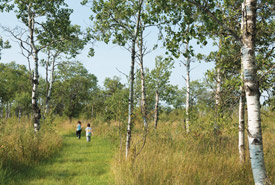 NCC is building upon decades of science-based conservation planning, ensuring it is well-positioned to move swiftly when opportunities arise. Take, for instance, the recent Birch River project in northeast Alberta. NCC partnered with the Tallcree Tribal Government, provincial and federal governments, Syncrude and the Schad Foundation to remove the timber quotas on 3,300 square kilometres of boreal forest so this area can be designated a provincial park. When added to Wood Buffalo National Park and other contiguous conserved areas, this is now the largest stretch of protected boreal forest on the planet.

Landmark achievements such as the Birch River project have been possible because of NCC’s unique ability to create partnerships with other groups. Creating partnerships across the spectrum has long been a priority for Lounds. “It’s not about us,” he says. “We’re in the business of creating conditions for nature to thrive. It’s about all that work.”

Crucial to these partnerships, of course, are NCC’s donors. “Often what we’re doing is facilitating other people’s dreams,” he says. “When someone gives a dollar to the Nature Conservancy of Canada, that’s a precious decision they have made.” The Landmark Campaign is built upon the desire of donors to “leave a landmark,” something that will continue to connect Canadians to the natural world and inspire new generations.

“This campaign is an unparalleled opportunity to make an impact – to protect and care for Canada’s lands and waters and all the species they sustain, including people,” says Lounds. 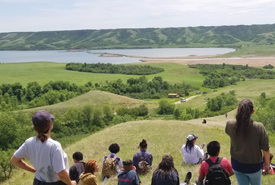 Students on a field trip to Pasqua Lake, Saskatchewan, as part of the Learning the Land program. (Photo courtesy of TD Bank Group)

But support of the Landmark Campaign will do more. It will provide additional opportunities for Canadians to get outdoors and appreciate nature first-hand, so that they may be inspired to protect it.

Connecting more Canadians with natural spaces and wildlife will build the foundation for ongoing conservation success.

Through this campaign, Canadians will be able to access events that will enrich their experience in nature. This includes joining NCC field staff at Conservation Volunteers days or joining conversations about conservation through the NatureTalks national speakers’ series, as well as youth engagement, education and skills-building days and employee engagement programs.

Local engagement is critical to NCC’s work. Just as Lounds himself recharges by taking to rivers and lakes in a canoe, a key part of inspiring Canadians to protect wild spaces is meeting them in the places they love. Indeed, more than 80 per cent of Canadians live within 100 kilometres of an NCC property. The Nature Destinations program, launched in summer 2017, invites people of all ages to explore forests, grasslands, mountains, lake areas — some of Canada's best examples of these remaining spaces. “It’s often when people see a potential change in a natural area that they’ve grown to love that they get working to make sure it’s conserved,” says Lounds.

Lounds believes that by connecting Canadians to conserved places, NCC creates champions for nature. Supporters of the Landmark Campaign will provide additional opportunities for more Canadians to spend time in nature, so that they may appreciate its value first-hand and be inspired to support its conservation.

Inspiring the next generation of conservation leaders 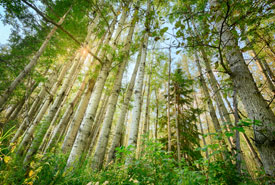 Another goal of the Landmark Campaign is to inspire future generations to build on our legacy and lead more conservation efforts in communities across the country. The campaign aims to invest in the next generation of conservation professionals, including more than doubling the size of its Conservation Internship Program.

“Protecting Canada’s natural spaces and wildlife needs the collective effort of all of us — young and old,” notes Lounds.

It’s a mission he urges the young people recruited into NCC’s ranks to take to heart, including the close to 75 interns hired this summer (with 100 slated to be hired next year). Conservation Intern Megan McGlynn is the daughter of ranchers near Pincher Creek, Alberta. She’s working to monitor the use of land purchased by NCC. She has seen first-hand how conversations can lead to collaborations that literally change the landscape. “Being a local rancher, I really appreciate how NCC works so closely with other local ranchers and helps maintain working landscapes,” she says. “I don’t think people know what a good steward NCC is.” 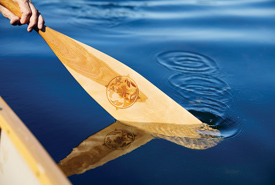 Cassia Foley is a summer conservation planning intern with plans to study climate change as a master’s student at McGill University. She traces her love of the natural world to her childhood home beside a lake, and the changes she watched as land was swallowed up to development. She appreciates the speed at which NCC responds to threats. “The work here is very fast and effective and actually conserving land. NCC takes the science of what we know is happening and does something about it.”

The energy, commitment and skill sets of NCC’s younger recruits inspire John Lounds. “Looking at how many young people work at the Nature Conservancy of Canada and how terrific they are; enthusiastic, smart, capable. It just makes me feel good about the future, having those young folks ready to lead the charge.” Supporting the campaign will support the leaders of tomorrow. NCC’s donors and supporters can help ignite the passion of Canada’s youth in carrying on NCC's work.

Back at the lake, Lounds allows himself the occasional rest or gentle paddle on this sweltering day. Yes, the Landmark Campaign — the largest single private investment ever in Canadian conservation — is an ambitious undertaking. “It’s up to all of us,” says Lounds. “At the Nature Conservancy of Canada, we’re ready to do our part, but we need the support of Canadians from coast to coast to make our goals a reality.”

Lounds turns his bow across the lake, a gentle wind at his back propelling him forward. Dipping his paddle into the water, he’s reminded of one of his favourite aphorisms: “If you want to travel fast, go alone. If you want to travel far, go together.” It’s a saying that Lounds has turned to several times over the years, and it seems just as fitting today, as he heads into the next phase of NCC’s journey.