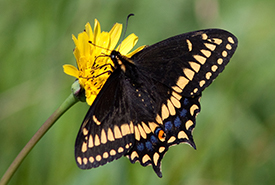 Canada is home to plants and animals found nowhere else on the planet. We need to protect them — for the next generations, and for the world.

Every nation has a unique role in saving our planet’s endangered species. As Canadians, it’s important that we know about the plight and prospects of wildlife from around the world. But it’s most critical that Canadians know about the fellow species that share our lands and waters, especially those that are threatened. These are the plants and animals that we steward and can take action to protect. Our decisions alone will determine their future.

If you live in Canada, you share your country with about 80,000 known wild species. This Canadian collection of known plants and animals includes a small but important group that live only here. And many of them are at risk of disappearing.

About 300 plants and animals occur only in Canada and nowhere else in the world. No other country can protect them. NatureServe Canada and the Nature Conservancy of Canada (NCC) recently released a report on this select group of nationally endemic wildlife. If we want to pass on the full richness of the world’s wildlife to the next generations, we need to protect all of these species.

We can use this time of social distancing to nudge closer to nature; to learn a little more about even just one of our endangered species that lives only Canada. Learning why they might disappear, and learning what we can do to save them. Here are six all-Canadian plants and animals that you are helping the Nature Conservancy of Canada to protect.

British Columbia | Known from the area near the Kumdis River Conservation Area. NCC will be conducting additional surveys for this species.

This subspecies is found only on Haida Gwaii and is distinguished from mainland hairy woodpeckers by its brownish underparts and extra black bars on its back and tail. It nests in tree cavities in mature old-growth forests. More information is needed on its population and trends.

Wood bison are the cousins of plains bison and live in the boreal forest. They are the largest land animal in the Americas. They were nearly wiped out by over- hunting in the 1800s. Wild populations occur in the Yukon, Northwest Territories and northern Alberta and BC.

This globally rare moss is less than two centimetres in height and has slightly twisted leaves. It is currently known to exist only in Ontario, where it is restricted to specialized alvar habitats on the Bruce Peninsula and Carden Alvar. These limestone plains occur in only a few places in the world.

This striking blue flower can only be found along the upper intertidal zone of the estuary of the St. Lawrence River in Quebec. It is currently found in fewer than 30 sites and is vulnerable to shoreline disturbance from trampling and all-terrain vehicle traffic.

There are two subspecies of short-tailed swallowtail that occur only in eastern Canada. It primarily lays its eggs on Scotch lovage. This large butterfly lives in coastal marshes, dunes and headlands. These coastal areas are threatened by development and sea level rise.

This evergreen shrub can be found only on Quebec’s Magdalen Islands, on Sable Island off the coast of Nova Scotia and in southwest Newfoundland. It can be found growing on wind-swept sand dunes and rocky barrens. This variety of the common juniper can be distinguished by its longer cones.

This story originally appeared in the Fall 2020 issue of the Nature Conservancy of Canada Magazine. To learn more about how you can receive the magazine, click here.