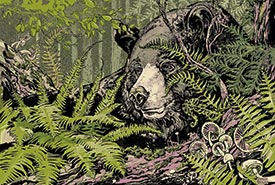 I’ve seen quite a few bears over the years as a wildlife biologist, as has my partner, Carol, while working up in the Yukon. But on a recent 10-day trip through the

Sunshine Coast Trail near Powell River, BC, I had one of the most incredible encounters with a black bear.

While trekking through this lush temperate  rainforest, we took a break at Fern Gully while our friends went ahead. It had been raining that day; the forest was beautiful, and  the air smelled of damp earth. I stretched out over the thick carpet of moss, soaking in the stillness. That’s when

I heard some distant shuffling in the woods behind me. “Must be some hikers coming up behind us,” I thought. But 10 minutes passed and not a soul in sight. Suddenly, I felt a presence looming behind me; the shrubs rustled and I could tell it was big!

About three metres away, Carol sat on a rock, breaking out a chocolate bar. I jumped up and ran quickly toward her, where my pack with the bear spray was.

I said, “There’s something big coming!” She thought I was after her chocolate!

I turned around and there it was, cresting a fallen log 25 metres away — a big, lumbering, jet black, black bear amidst the backdrop of the bright green mosses and ferns. I said, “Hey, bear!” to make our presence known, and he looked at us, turned and ambled away into the forest. He respected us and our space, and we both went on with our day. It was amazing how such a large bear could be so silent and stealth-like in a thick forest.

When you come face to face with a massive animal, you need to remember that this is its territory and respect its space. Our job is to give bears plenty of natural space so they can find their own healthy, natural foods. Their safety and ours depend on how we behave in bear country.

Luckily, our encounter ended on a happy note, and I have that image framed in my head forever.

This story originally appeared in the fall 2020 issue of the Nature Conservancy of Canada Magazine. To learn more about how you can receive the magazine, click here.